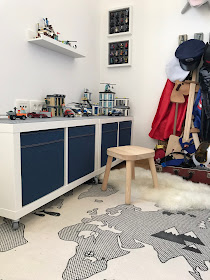 Our family dynamics have changed a lot this past year.  Aidan is of course getting older, and getting into "big kid" toys, which are super fun!!
On the other hand, we have this new little peanut of a girl, who is going to be mobile sooner than you know it!  As much as Jocelyn adores her big brother, I know she's gonna want to get into everything of his - and I think it's important to protect his stuff, and avoid possible frustrations.  Aidan can't get enough of his baby sister, but I also know that that could change drastically if she were to constantly mess up his creations.
Up until now, we've had a LEGO table set up in the living room/family room.  However, whenever Aidan and Dan built something, it would need to get put away, which inevitably meant it had to get broken down, rendering it unable to be played with. 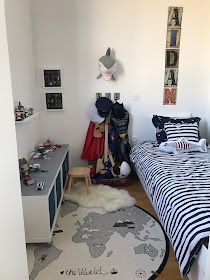 SO, we wanted to move the LEGOs into Aidan's room, where we could shut the door to his room, and keep the baby out.  But we also wanted it to be cool, and mobile.  So, Dan, being the incredible  dad that he is, got to building one! 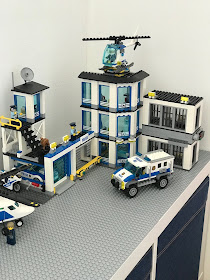 Here were the criteria we had:
- on wheels to make it mobile
- LEGO base for building onto
- storage
- ability to set it up a couple different ways, since we will probably not live in this exact space forever.

If you would like to create one of your own, this is what you'll need:
- 2 IKEA KALLAX 77x42
- 2 sets of RILL wheels
- 4 DRONA bins in denim (the denim was new, and I am so thankful for it!  We were going to settle for gray, but the denim looks great in his room!)
- 4 LEGO Gray Baseplates
- Drill with a phillips bit
- Hot glue gun and glue sticks

1. Build the KALLAX shelves according to the directions.

2. Attach 4 wheels to each shelf, in the corners, on one of the long sides.

3. Using a hot glue gun, adhere the baseplates to the top of your "table" - 2 on each.  They're not quite an exact fit, the table is about a 2 cm wider than the baseplates, so just make sure you line it up the way you want it before you glue it down. 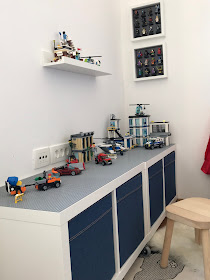 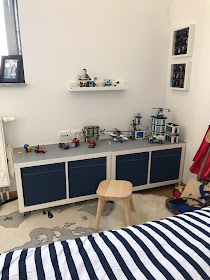 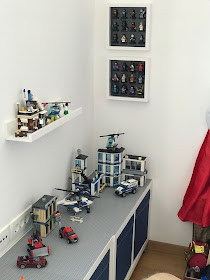 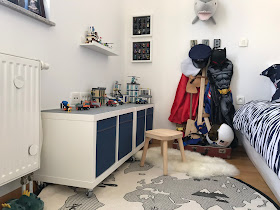 Here are a couple extra thoughts:
- we made some mini figure displays, instructions to come later. 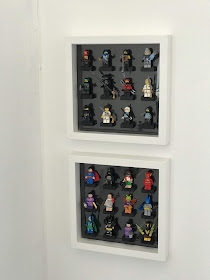 - we bought a little wall-mount shelf at IKEA too, to add another dimension - in this case a "mountain" for the ski lodge. 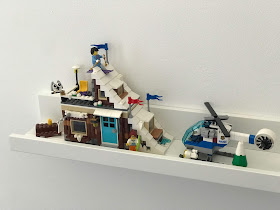 - Eventually we plan on gluing baseplates in the cubbies as well, so that the bins can be slid out, and the space can be used to play on.
- We bought some smaller storage elements, and organized the remaining pieces by type - Ninjago in one, Batman and friends in the other, LEGO City in another... you get the picture. :) 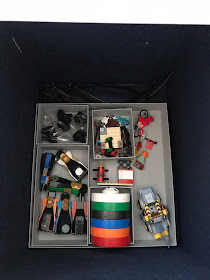 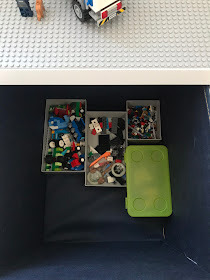 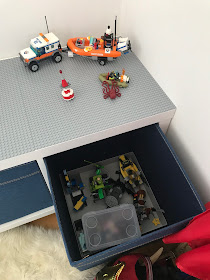 - initially we had it in an "L" shape, but prefer it all against the same wall.  But I love that if we ever WANT it set up differently, we can change it! 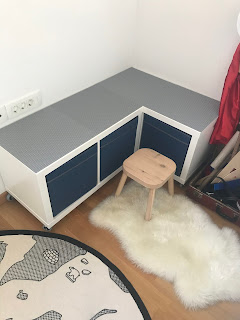 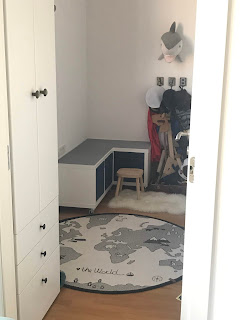 Anyway, it was a HUGE hit!

Dan and Aidan have spent every afternoon in there building, and playing with the sets.  I love that there is the ability to keep the built pieces out, and if needed later on, it is easy to make another addition.  I also love that it is mobile, and that we aren't "exiling" Aidan to his room. 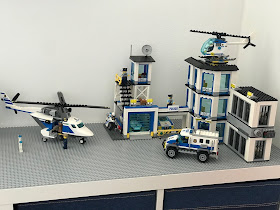 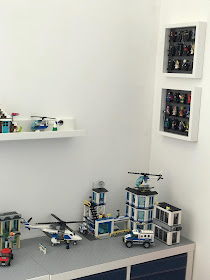