On the one hand, lizards give me the creeps.  On the other hand, they're super cool.  And there are so many different types!  Also, as I've mentioned before, for now God made me a boy mom, so I'm trying to embrace all of that!  In addition to all of that, we live in Florida, which I'm pretty sure is the unofficial lizard capitol in the world.  (Okay, Madagascar and the Amazon may lay claim to that too.  But I'm telling you, they're everywhere!)
And with that, welcome to our lizard week!

Week 12
Letter: L
Number: 2 (Sort of.  We reviewed.)
Color: Green (with mention of lots of other colors)
Animal: Lizard 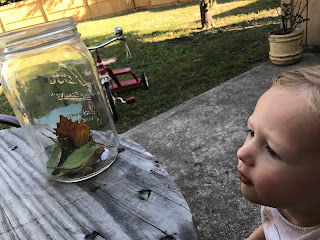 You know how little girls in frilly dresses catch butterflies with nets?  Well, little boys with dirt on their knees and sticks in their hands catch lizards with nets!  (Don't worry, no lizards were hurt in the making of these photos, and the stick was not used, haha!) 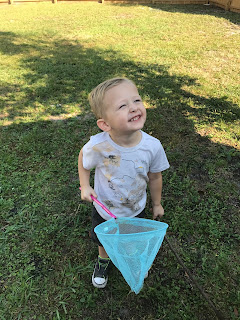 So, Dan helped Aidan catch the lizard first, which we put in the jar, and tried to make feel cozy.  We watched him try to scale the walls, which he couldn't (obviously wasn't a gecko), and were able to get close and personal.  After that, we let him go, but he decided to stick around, and Aidan caught him all on his own!  He nearly burst with pride! We let him go again, and searched for more lizards.  We found a few, but none they were all to fast for us!

2. Mixing our own colors 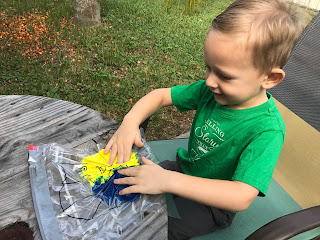 For this activity, I placed a ziplock bag over the cover of the book, The Mixed Up Chameleon, and traced it with a sharpie.  Then, I squirted blue and yellow paint in it, duct taped the top and let him mix and squish to his heart's content. 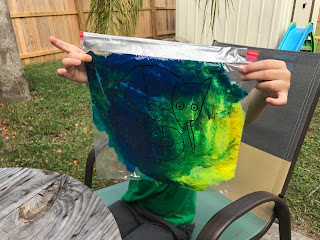 It turned out pretty adorable!  This got me thinking.  The logo for ISMK (International Society of Missionary Kids) logo is called Miko the chameleon. 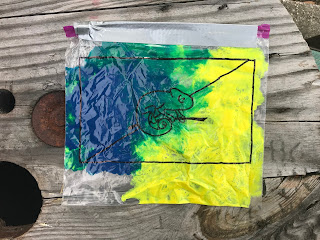 The ISMK flag is blue on one side, and yellow on the other, with a green Miko in the middle, representing the fact that missionary kids take on traits from their sending country as well as their host country, creating their own unique culture.  So, we made another one. :) 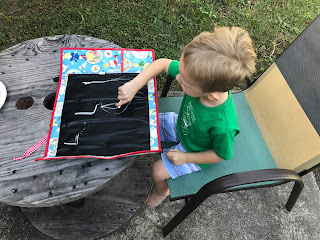 My amazingly talented Mama made Aidan a roll-up chalkboard for long trips.  It's super amazing!  It's perfect for practicing fine "writing".
First, I wrote "L" a couple times, then held his hand and wrote a couple together. 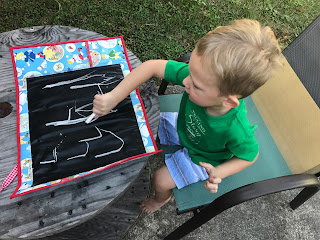 After that I just let him go at it.  He was really good at the up and down motion, we're still working on the side to side. (And no, we did not do all this on the same day, he just wore the same shirt.  All.  Week.  Can you say laundry???)

1. The Mixed Up Chameleon Snack 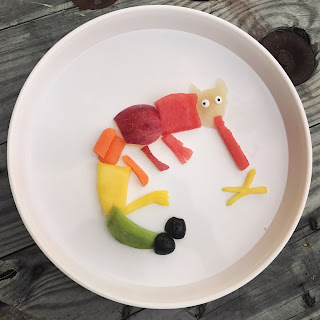 I feel like this one could've been a little cuter, but I was under a bit of a time crunch... namely a hungry toddler.  For this one, I used a rambutan, watermelon, apple, carrot, mango, kiwi and olives.  I would've preferred blueberries, but I didn't have any.  Aidan ate everything, except the olives (shocker, haha)! 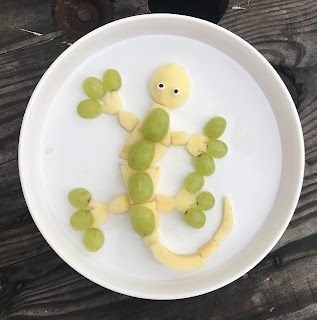 For this snack, I used apple slices and grapes.  I basically just cut a bunch of pieces, which I put together, kind of like a puzzle.  It turned out really cute, and to me looked like it was really stuck to the wall.  Aidan was a fan, too! 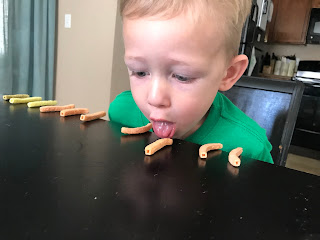 Chameleons have this AMAZING,sticky tongue, that they "thwap" out, and catch food on.  So, we decided to see what that would be like.  I used veggie straws,  but you could probably use pop corn too.  It just has to be a snack that easily sticks to your tongue.  So Aidan stuck his tongue out, and had to try to eat the veggie straws without using his hands.  Super fun! 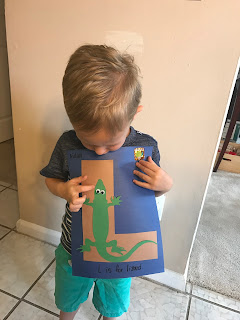 To add to our alphabet book, this week we made an "L is for lizard" page.  I found a coloring page, which I printed out, cut out, traced on colored paper, and then had Aidan reassemble.  It turned out really cute, and Aidan loved his lizard! 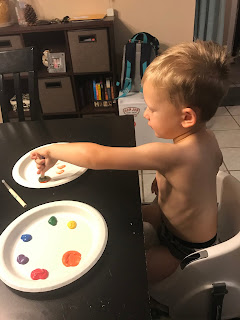 For this craft you'll need three plain white paper plates, small sharp scissors, paint and paint brushes.  I squirted out the paint onto the first plate.  Then, I let Aidan choose what colors he wanted to use, and he painted on the inside of the second plate.  While he was painting, we talked about which color was what, etc.  When he was done, I cut a chameleon shape out of the third plate, and placed that on top.  As you twist the plates, the chameleon changes colors. 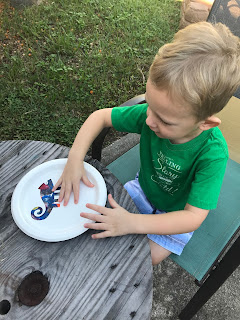 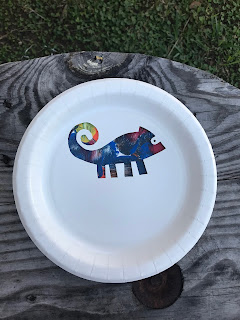 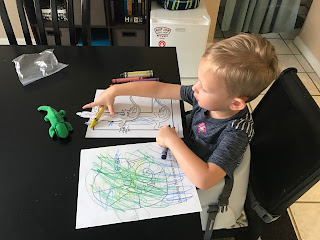 Aidan is newly into coloring, which is a great time-killer, like when you're trying to put dishes away, or do laundry. :) (We also counted how many lizards we could find.)

1. Lizard In the Sun by Joanne Ryder

I found this book when we went a Library sale.  It's a great book about a boy, who spends the day as a lizard in his back yard.  I love it, because it looks exactly like the ones in our back yard.  It's also great for going over lizard "powers".

2. The Mixed Up Chameleon by Eric Carle

In case you're not familiar with this story, it's about a chameleon, who one day decides he's not good enough the way he is.  So, he wishes he was... handsome like a flamingo, cunning like a fox, funny like a seal... until he realizes he's perfect the way he is.

3. A Color of His Own by Leo Lionni 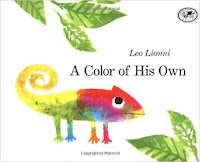 This is a super-sweet story about a chameleon who is upset because he doesn't have a color of his own.  One day, he meets another chameleon, who tells him, yes, it's true they will never have a color of their own, but if they go through life together, at least they'll always be the same color as each other.  I think the reason I like this one, is because I grew up as a missionary kid, and now I have my own little missionary kid.  And even if he doesn't feel like he belongs, at some point of his life, at least we'll be going through it together.

1. Wild Kratts, Season 1 Episode 4: Flight of the Draco - This is a fun episode about a lizard that can glide!

2. Wild Kratts, Season 3 Episode 15: Chameleon on Target - I find Madagascar fascinating, so this episode about the chameleons on the island of Madagascar is super fun for me!  (Oh, and Aidan.)

3. Octonauts, Season 1 Episode 43 (Episode 25 on Netflix): The Octonauts and the Marine Iguanas - This is a fun episode, because marine iguanas are one of the only lizards that can swim.  Also, they eat sea weed, and sneeze out the salt.  Something that Aidan finds hilarious!

4. Tinga Tinga Tales, Season 1 Episode 16 (on Netflix): Why Lizard Always Hides Under Rocks - a fun folk tale about lizards.  And if you're like me, the intro song to Tinga Tinga Tales will get stuck in your head.  You're welcome.

Posted by Serendipitous at 9:20 AM

Email ThisBlogThis!Share to TwitterShare to FacebookShare to Pinterest
Labels: 2, A color of his own, art, crafts, Green, ISMK, L, Letter L, lizards, Miko the Chameleon, number 2, The Mixed Up Chameleon, Toddler, Toddler Fun