The Legend Of The Candy Cane

There are so many perks to working at a christian school.  Especially around Christmas time.  As a christian, Christmas is such a special time.  So many elements of Christmas have deep meanings, however in a secular setting one would not be allowed to mention them, let alone have an entire class theme revolve around them.
Each class chose/was given a theme for their Christmas bulletin board.  I chose candy canes.  I've always liked candy canes, and am one of those weird people that actually eats them.
We read The Legend of the Candy Cane: 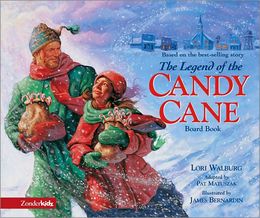 For our craft, I had them draw a candy cane shape on the paper (and emphasized that it looked just like the letter J), then I painted one of their thumbs red, and the other white.  I had them stamp their thumbs along the line one at a time creating a pattern.  After they'd mostly gotten the hang of it, I let them decide which the "came next", so that they understood the idea of a pattern.  We also then glued a poem I'd found next to it. 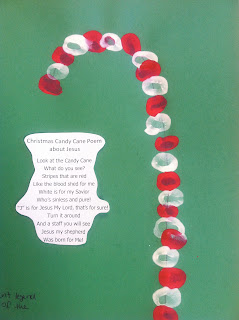 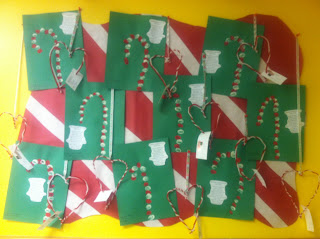 I also found these stickers (I've seen them many places, one place being christianbook.com), which were a wonderful edition to our lesson:

I gave these out to my kids on their way out the door.  On my way home, I stopped and Target to pick up some lady products.  I saw one of them was "buy one, get a mascara free".  Well, I needed mascara, so I picked that one.  At the cash register, I told the lady I only wanted the mascara if it came in the package deal.  She said it wasn't showing up.  I told her I wouldn't lie (not in a defensive way, just making my case), and she said "Oh, I know you wouldn't" and rang it up free.  On my walk home, I was like "how does she know I wouldn't lie?"  I got to our apartment, looked in the mirror, and saw that I was wearing one of the stickers, and completely forgot to take it off.  Apparently she figured, anyone willing to wear a Jesus sticker in public wasn't going to lie about a tube of mascara, haha...

Posted by Serendipitous at 9:46 AM