I've been gone for so long, I have many many themes to go over.  Our school had their community helpers theme in late fall, however many other schools may have them at another time.
There are many cute ideas out there about community helpers, so it's hard to choose.

Firstly, we talked about safety.  In connection with that, I had the kids cut out red, yellow and green circles, which we then taped to large popsicle sticks.  I made a set of my own, onto which I wrote "Go!", "Slow!" and "Stop!".  During outside time, we played red light/(yellow light)/green light.  The kids loved it so much, that they played with their own, and requested it every day that week. 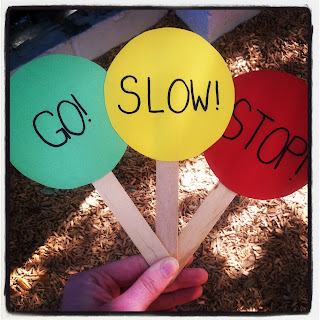 I printed out badges that looked like either firemen or policemen badges, on which they wrote their names, and then colored them.  I pinned them on them, and they wore them for the day that we talked about that particular community helper.  I also had hats they took turns wearing.
Here are some of the templates: 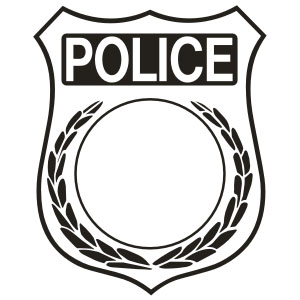 On Thursday, we had a fire truck visit us, and the kids got to get up close and personal with some of the equipment.  In honor of that, I had my students cut out certain shapes, which when put together made a fire truck. 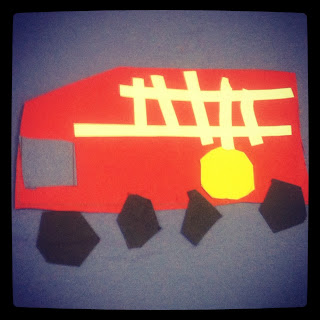 Although I probably could've come up with this on my own, I found this one on tams-thisandthat.blogspot.com.

Finally, my favorite part of the week was when I had each child draw a picture of what they love doing most with their family.  Then, they got to put the stamps on the envelope, lick the lip of the envelope (their favorite part) and stick it down.  Awesomely, there is a mailbox right outside our school.  So, I put on the mailman hat, out the letters in a messenger bag, and we all walked outside.
Each child got to pull down the latch, put the letter in, and then close the lid. 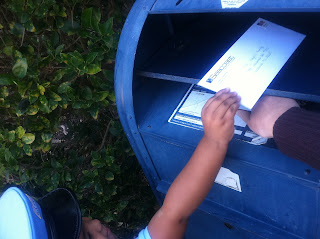 Let me tell you, they had a blast!  They couldn't wait for the letters to arrive!  I asked the parents to send the letters into class with the children when they arrive, so all the children could see the full-circle of mail system.

This was one of my favorite themes, as there are so many things a person can do!
Posted by Serendipitous at 6:45 PM