Merry Christmas, everyone!
This "week", has been more like 2 weeks, intermittently.
Of course, there was Christmas, and Dan had to go visit his mom because she was in the hospital, so all in all it's been a little chaotic.
But!  Let's go ahead and get started.  Before we move on, let's review:

So, this week we had a Jacksonville Jaguars game planned, and with it being Christmas, I thought it would be a nice week to learn more about Jesus too! 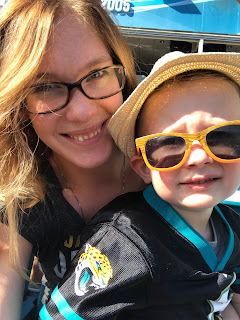 So, it wasn't a very Christmassy thing to do, but on Christmas eve, we went to a Jacksonville Jaguars football game.  And, as a Christmas miracle, they actually won!!!  Aidan was a little disappointed however, because he was under the impression that actual jaguars were going to play football.  Poor baby, haha!  We had a lot of fun though, and spotted the "j"-s wherever we looked.

2. Jaguars at the Jacksonville Zoo 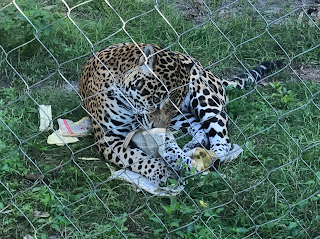 The Jacksonville Zoo has an award-winning Jaguar enclosure, and it's not hard to see why.  I like arriving right at opening, because the animals are really active, as it isn't too hot yet.  Although we visit at least bi-weekly, we hardly ever see the jaguars. 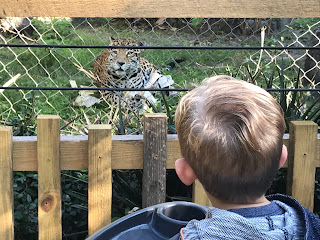 On this particular visit though, we really lucked out, and got to see two of them; a male and a female.  There is also a beautiful black one, but I haven't seen it in a while.  Because there was hardly anyone else there, we were able to just sit and watch them, which was wonderful! 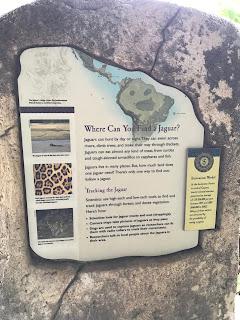 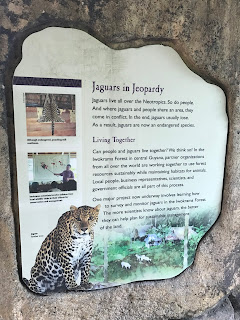 I know some people have issues with zoos, and I do understand why.  I don't love ALL zoos, but our zoo is accredited with the AZA, and clearly cares about the animals in its care.  Of course, ideally I would prefer the animals were free and in the wild.  But most zoos nowadays take injured animals, or animals born in captivity (who would not know how to live without human interactions at that point), rather than taking hordes of them out of their natural habitats for entertainment.  The animals at this zoo are not forced to do certain things, and they only use positive reenforcement in training (which is important, so they can administer medicine, vitamins, and things like that).  I do not agree with cruel treatment of animals, and for this reason do not do circuses, or SeaWorld.  But well-intentioned, conservation-minded zoos - yes!  I love reading all the information on the animals, but it's hard while chasing a toddler.  So, I took pictures of them, to read later. :) 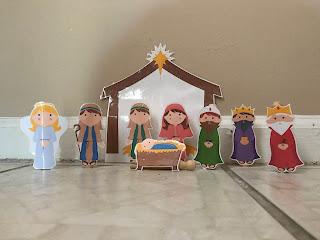 I have a beautiful Willowtree Nativity, which Aidan helped me put out.  Growing up, we each had our own nativity, but I was unable to find a wooden one for Aidan that I liked in time, so I decided to make one.  I found a kids' nativity puppet set, which I printed out. 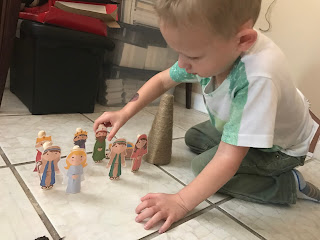 I don't have a laminator, so I used clear packing tape on either side, and then cut it out again.  Then, I taped them to some wooden clothespins, and there you have them!  Aidan loved playing with them! 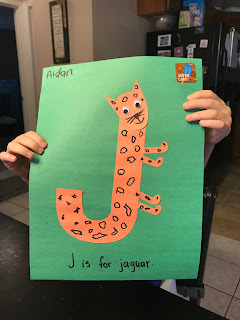 To add to our alphabet book, we made this super-cute J is for Jaguar.  For this, I cut out an orange J, a head and 4 legs.  I helped Aidan glue the pieces on, and then draw rosettes and whiskers.  We also glued on googley eyes.  Duh. :)  It turned out really cute, if you ask me.

2. The Legend of the Candy Cane 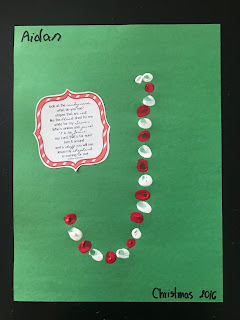 Back when I taught VPK (K4), I did a whole week one the legend of the candy cane.  One of my favorite things we did was this candy cane craft.  I wrote a J with a pencil, and then dipped Aidan's two index fingers in red and white paint. I had a real candy cane laid out, and asked him what colors he saw.  Then I (very very basically) explained that it was an AB pattern.  Then I helped him make alternating dots with his fingers along the "J".  As we did it we said "red, white, red, white, red, white", etc.  to help the concept sink in.  I also found this cute poem which talks about how the candy cane points to Jesus, which I cut out and Aidan glued on the page. 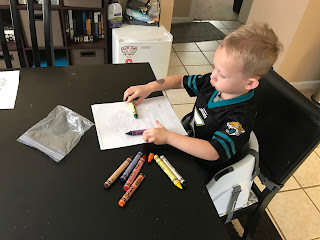 I found a coloring page of the Jaguars logo, which we colored on game day. 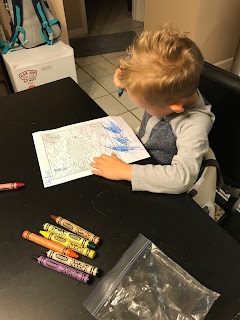 I also found one of a jaguar in the jungle, with the word jaguar at the bottom.  I asked him to color the letters, and as you can see, he got REALLY into it, haha!!

This was Aidan's favorite of the week, he cried when we took it back to the library.  It's a cute, easy reader, which by the end of the week, Aidan was reciting, and "reading" to himself!  It had great repetition, and a mama jaguar, which Aidan particularly loved! 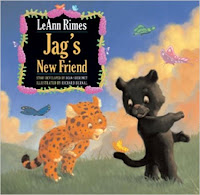 Don't bother with this book.  The story was choppy, and didn't make much sense, and had words like "dumb" and "stupid".  I didn't care for it at all, but the illustrations were very cute, so that's redemptive. :)

3. A Boy And A Jaguar by Alan Rabinowitz 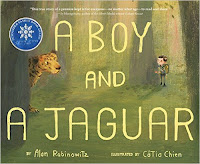 This book, however is a gem!! I would love to own this one!  It's a boy who stutters, and has a love of animals.  He promises his pets that when he finds his voice, he will help them have one too.  He goes to Belize to study Jaguars, where he is able to convince the government to open the first and only jaguar preserve.  It's a great story about overcoming, and loving animals. 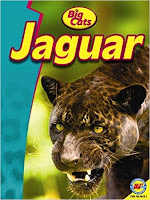 This book is geared more towards elementary aged kids, but I wanted Aidan to see actual photographs of jaguars.  What was REALLY cool for us, is that this book actually referenced the jaguar preserve mentioned in the earlier book!  There was a picture of a poached jaguar's skin, which did bother Aidan, and every time he saw it, he said the jaguar was broken, which in return broke my heart.  He has a very tender spirit.

Every 4-year-old in Jacksonville receives a set of books, to encourage early literacy education.  One of these is about the Jaguars.  Obviously, Aidan isn't 4 yet, but I actually found this at a second-hand-store months ago.

1. Wild Kratts Season 2 Episode 9: Shadow: The Black Jaguar - you can find this on DailyMotion or youtube.  In true Wild Kratts fashion, you learn all kinds of new information about jaguars.

2. Elena of Avalor - this new Disney Junior show has magical creatures called "jaguins", that are a cross between a jaguar and a griffin.  Aidan really loves Elena, but not for her jaguin riding skills, haha!  I think the boy has his first crush!

And that's about it!  I hope you enjoyed our jaguar week!  We didn't do any crazy special snacks this week, but I'll try to catch up next week!  Happy New Year, folks!
SaveSaveSaveSave
Posted by Serendipitous at 3:04 PM