So, when the most interesting animal I could find that started with Y was a yak, I decided to give in, and do "Y is for Yoda".  I knew it would really help the letter stick. 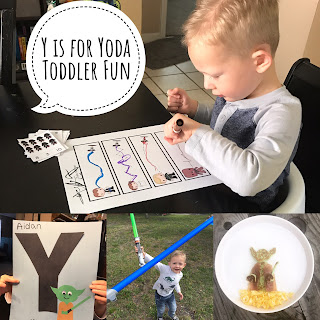 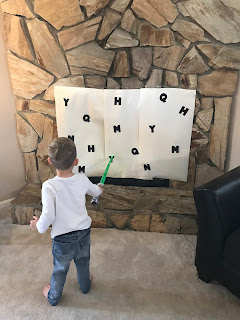 This was going to be an outside activity, but it was so windy, we had to take it inside.  I used a large reel of paper, taped that up, and then taped some of the recent letters on it.  Then I would tell Aidan to "find the letter Y", or "find the letter Q", and then he had to skewer it with his light saber. 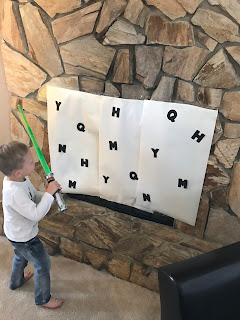 He had very good moves! 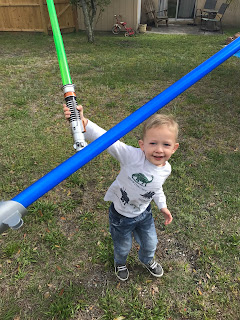 We had THE best family fun, when all three of us grabbed light sabers, ran outside, and dueled and giggled... best time ever! 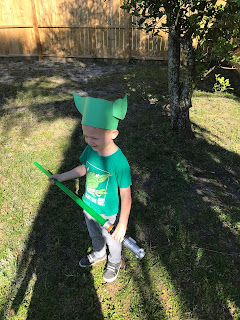 I made Aidan these Yoda ears to help him with his pretend play.  Imagination is so important! And pretend play is very underrated!  Aidan loves to pretend he's characters from his favorite show, so these were a hit! 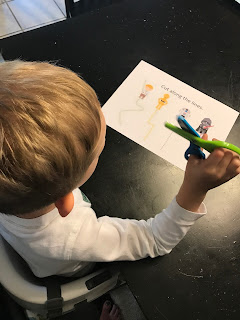 I found this fine-motor cutting practice sheet!  Although the source link didn't work, I just printed out the picture larger (and a little grainier).  Aidan has these great toddler security scissors, that open themselves back up, which helps a lot.  I helped Aidan out on the first couple, but then he took off! 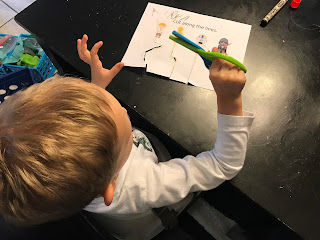 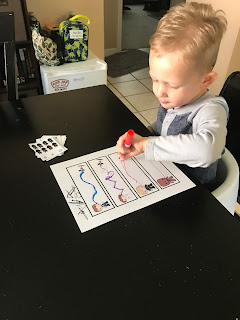 The next day, I had a similar sheet, but this time He had to use his marker to trace a dotted line between a character and a TIE-Fighter.  He did pretty well!  Also, he wrote his name all by himself. :) 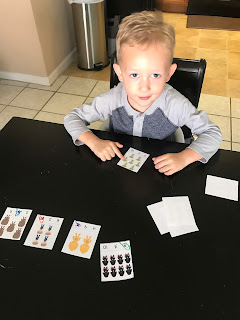 I found these Star Wars themed number cards.  They each had a certain number of items on each card, with three numbers on the bottom.  He doesn't really know his numbers yet, so this was a group effort, but it was good practice! 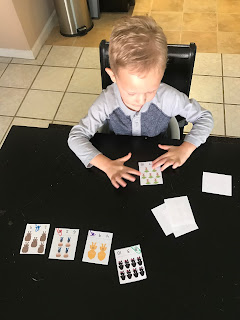 He did a great job counting, as well as "circling" the correct number! 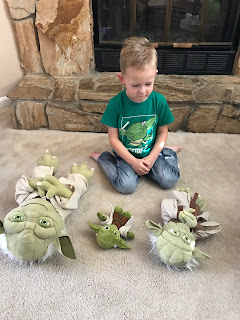 One of the really important concepts kids need to know is ordering by size.  Lucky for us, we have three Yodas, all of which are different sizes.  Most kids naturally start sorting by size - for example, the big one is always "daddy", the middle one is "mommy", and the little one is "Aidan".  So, the first time, I asked him to put them in order, smallest to biggest.  Then, biggest to smallest. 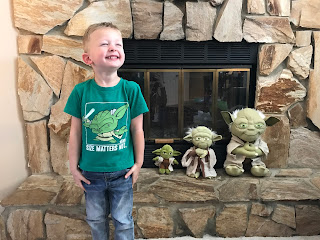 After that we compared and contrasted them: They're all green, they all have a robe, crazy ears, an white hair.  BUT, only the middle one had a cane, and only the two biggest had nails that stuck out.  Fun activity! 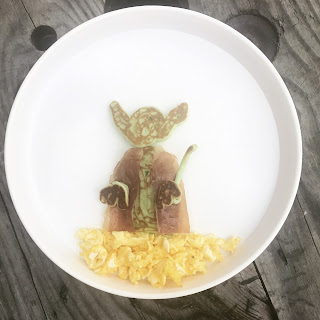 I made Aidan green pancakes in the shape of Yoda's head, body, hands and lightsaber.  I'm not like that amazing dude who does those Disney pancakes, but it wasn't bad!  Then baked some prosciutto (I didn't have any bacon) for the robe, and made some eggs.  Yummy it was! 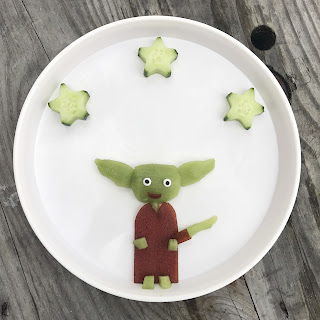 For this adorable creation, I used kiwi for the head, and fruit leather for the robe.  Candy eyes, and cucumber stars. 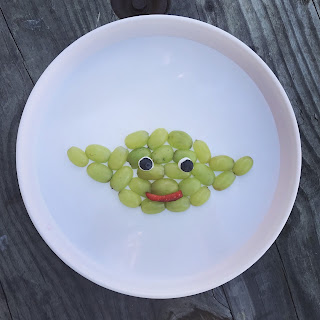 I don't know if this one really looks like Yoda or not, but it sure is cute! :) I cut the grapes in half, and arranged them to look like Yoda.  I cut a mini marshmallow in half for the whites of the eyes, and blueberries for the pupils.  Oh, and a strawberry smile, of course. 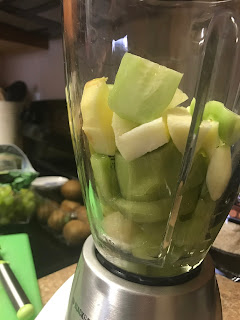 I have been making Aidan and I smoothies lately.  This one was actually his favorite so far!  I used an Outshine veggie and fruit popsicle (for the frozen part), pealed grapes (harder than it sounds), kiwi, apples, cucumber, added some apple juice, and honey... and it was a HUGE hit!  Now he's been asking for Yoda juice everyday! 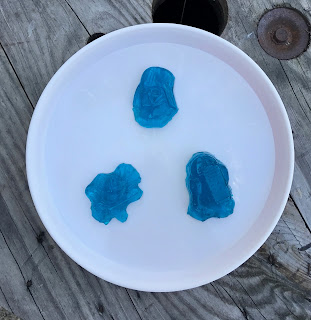 Okay, I'm not really a huge Jello person, but Dan really likes it, and I'm pretty sure most kids do. So, a few months back, He bought some Star Wars themed Jello (because there was Star Wars themed everything), which came with these molds.  He kept the molds, and we had Jello laying around, so I made some jigglers.  Not my best work, but hey!  Aidan loved it, so there's that! 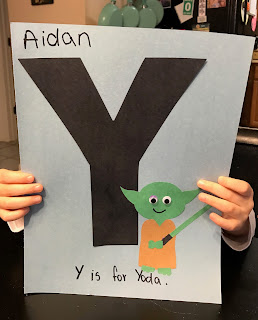 For this adorable craft, I cut out a giant letter "Y", then a green Yoda head, brown robe, green hands and feet, and a lightsaber.  Aidan put it all together, and ta-da! 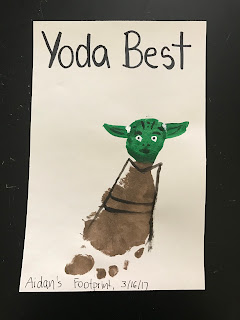 For this cute craft, I painted Aidan's foot brown and and green, and pressed it down.  Then I added ears, wrinkles, eyes, hair, and the outline to his robe.  We made a few of these, and are going to send them to some of our favorite people!

Aidan got this amazing book set from his aunt and uncle a little while back.  It's very kid-friendly, and still manages to give a really good synopsis of each movie!  There are a couple of intense illustrations, but they don't seem to bother him. :) 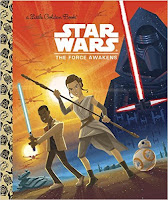 This is the next installment!  No Yoda in this one, but he actually went to see it with at the movies, so he remembers it pretty well! 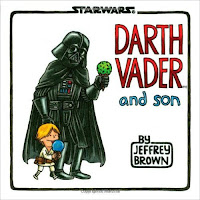 This is a very cute book, about what might've happened if Darth Vader had ended up a single parent to Luke Skywalker.


4. Other Star Wars Themed Books
Okay, so unfortunately I didn't get these books, BUT you should totally get them.  There are Star Wars Alphabet books, as well as counting books.  So much fun!

1. Star Wars Clone Wars - This animated Star Wars series is currently on Netflix (it is a kids' show - not one of those weird adult animated shows, but for some reason you can only access on an adult profile).  I wish the prequels had had more of what's in this show in them, I might have liked them better!  Best part?  Yoda is in it! (There's also a movie by the same title, that is a precursor to this show.)

2. Star Wars Rebels - This is a Disney Channel show, with Aidan's favorite characters - Ezra Bridger, Kanan, Sabine and Hera.  Who we all have to be when playing pretend, haha!

Posted by Serendipitous at 8:23 AM