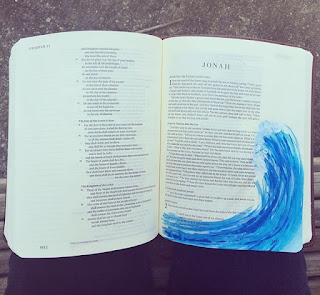 Last year I was invited to speak to a Sunday School class for teenagers.  It was for a missions convention, so we were asked to speak on missions.  Although I grew up as a missionary kid, I've never been an adult on the missions field, and felt a little unprepared.  So, I decided to go to the source.  No, not Google, the Bible.  We all know about Paul as a great missionary, as he was, but I wanted to talk about a story most of the kids would recognize, but in a new way.

So, I decided to talk about Jonah.

It really brought the story to a new light, and then this week, we're learning about whales, so the story of Jonah came back up in our devotions, and I thought I would share it with you.

There are a few questions after each point, I encourage you to think about your answers before moving on.  (I feel like I should mention, that I don't feel this way about being a missionary to Slovenia.  But sometimes there are things we have to do, that we don't want to do.)

A)
Now, most of you know the story of Jonah.  He was God's prophet, which means that God spoke through him, and gave messages to people.  One day God told him to go to the notorious city of Nineveh, and tell them to turn from their evil ways, or they would be destroyed.  Jonah quickly got up, and... went in the opposite direction, to Tarshish.  So, he got on the boat, fell asleep, and a huge storm came.  So big in fact, that all the people on the boat started to pray to their own gods, and throwing cargo off the ship.  Finally they woke Jonah up, and he told them he was the cause of the storm.  They went back and forth, and eventually threw Jonah into the sea.  The waters calmed down, and then a giant fish showed up, and swallowed Jonah.  Jonah was in the fish's belly for three days and three nights, where he repented, and asked God to forgive him.  God did, and the fish spat him out.  Jonah went to Nineveh, told them that God was going to destroy them if they didn't change their ways, and (imagine that) they did!  And Nineveh was saved!

And that's usually where we end the story.

But there's a whole other chapter left.  Here it is:


Jonah's Anger and the Lord's Compassion

But it displeased Jonah exceedingly, and he was angry. And he prayedto the LORD and said, “O LORD, is not this what I said when I was yet in my country? That is why I made haste to flee to Tarshish; for I knew that you are gracious God and merciful, slow to anger and abounding in steadfast love, and relenting from disaster.  Therefore now, O LORD, please take my life from me, for it is better for me to die than to live.” And the LORD said, “Do you do well to be angry?”

Jonah went out of the city and sat to the east of the city and made a booth for himself there. He sat under it in the shade, till he should see what wouldbecome of the city.  Now the LORD God appointed a plant and made it come upover Jonah, that it might be a shade over his head, to save him from his discomfort.  So Jonah was exceedingly glad because of the plant. 7 But when dawn came up the next day, God appointed a worm that attacked the plant, so that it withered.  When the sun rose, God appointed a scorching east wind, and the sun beat down on the head of Jonah so that he was faint. And he asked that he might die and said, “It is better for me to die than to live.”  But God said to Jonah, “Do you do well to be angry for the plant?” And he said, “Yes, I do well to be angry, angry enough to die.”  And the LORD said, “You pity the plant, for which you did not labor, nor did you make it grow, which came into being in a night and perished in a night.  And should not I pity Nineveh, that great city, in which there are more than 120,000 persons who do not know their right hand from their left, and also much cattle?”

And then it ends.

Some questions to think over:
1) Why was Jonah so angry?
2) Why all the dramatics?  He sounds like a teenager who got grounded.
3) Why do you think we usually leave that part out?

It all comes down to this - Jonah didn't have love OR respect for the people God called him to.  He saw them through his own eyes, not God's.  He didn't even try to.  THEN he got upset when God does forgive them.  He even says he knew He would, and that's why he ran away in the first place.

Some questions to think over:
1) Who are the Ninevites in our culture or lives?  (I'm going to answer this one too.  It seems to me, like they're the people who in theory we wouldn't mind being saved, but yet still get upset when God forgives them.)
2) Why do we feel that way?  (Try to answer this as honestly as possible.  Ouch.)

C)
At the very end, Jonah gets cozied up to watch the destruction take place.  Even though he has a terrible attitude, God is still trying to teach him a lesson - He lets/causes a plant to grow to give Jonah shade, and then makes it die.  Jonah throws another toddler tantrum.

Some questions to think over:
1) Why?
2) What was God trying to teach him?
3) Why do you think Jonah was so upset the plant dies, but was not moved by the prospect of 120,000 people being annihilated?  In fact, he wanted to be around to watch it?  (Personally I think it's because the plant served a purpose, and he had already judged the people before he got there.)

D)
It ends with a question mark.  I was curious about who the author was.  There actually isn't a consensus, but most scholars believe it was Jonah himself.

1) Does this effect your view of the story at all?
2) What do you think happened next? (All we know about Jonah is this story.  Just 2 1/2 pages in a book that is 1340 pages long.)
3) How much longer might his story been, had he been more obedient?
4) How does this apply to us?

I don't want me life to end with a question mark.  I don't want to be a reluctant missionary.

Sometimes we are called upon to do things we don't want to do.  Sometimes we REALLY don't want to do them.  Sometimes we act like total toddlers.  I am so thankful that God gives us chance after chance.  With those chances for us though, he also gives the same chances to everyone.  Even those we don't like.  Even those we hate.  Don't let hate creep into your heart.  Look at people through God's eyes.  He sees everyone as someone worth dying for.

Posted by Serendipitous at 1:27 PM