I absolutely love manatees!  I always have.  Since the Barbara Manatee song in Veggie Tales, and then even more so when we moved to Florida.  I made Dan promise me that we wouldn't leave Florida until I got to see some manatees.  So, my man was on a mission!  Last week we were in Tampa for a service, and the time had come! 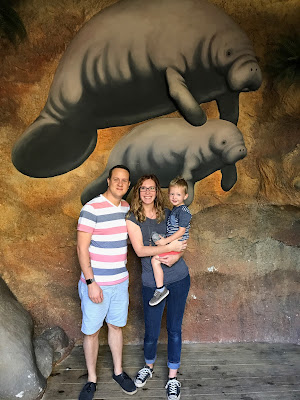 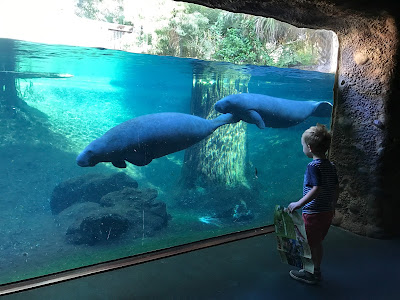 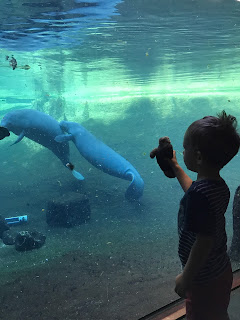 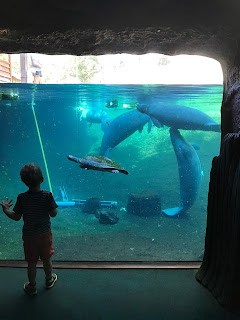 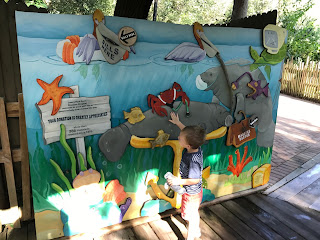 The Tampa Lowry Park Zoo is amazing!  Because we are Jacksonville zoo members, thankfully we got in for 1/2 the price, so that was a bonus!  At this zoo, they have a manatee rehab hospital, where they take in injured manatees, fix them up, and then release them back into the wild.  It was so beautiful to watch them swim - they're a lot more graceful than one would think!  It was the perfect start to our manatee week! 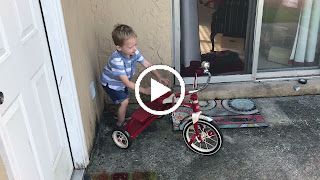 Manatees have no natural predators.  We are their greatest threat.  They are curious by nature, slow swimmers, and being mammals have to come up to breathe.  This means that they often get hit by boats and propellers.  The ladies at the zoo actually said they can identify them by their scars (so so sad).  Anyway, all that inspired me to do a "Caution Manatee Area" Obstacle course.  I printed out "Caution Manatee Area" signs, and posted them around the course. Aidan has two manatee toys, which I placed strategically for him to avoid.  He had to climb, slide, "swim" and go through "sea grass".  It was a blast! 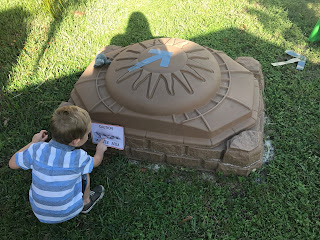 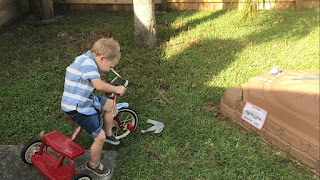 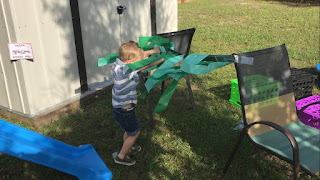 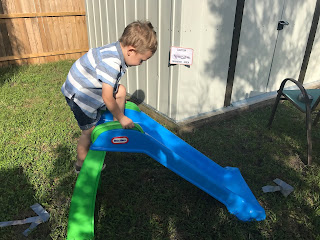 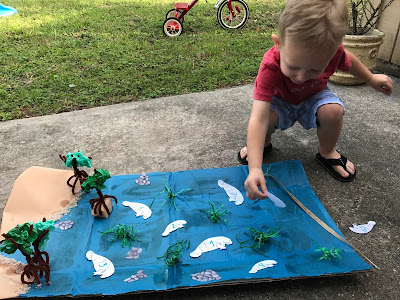 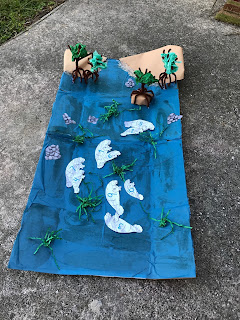 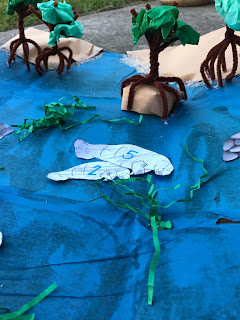 Since we've gotten to see manatees in the wild, I thought it would be a great activity to make a habitat.  Also, it gave us a chance to practice out numbers.

I took apart a cardboard box, brushed white school glue on it, and put blue tissue paper on top.  I had some scrapbooking paper that looked like rocks (score!), which I cut into pieces.  I took brown pipe cleaners, cut them in half and twisted them together in the middle to make mangrove trees.  I got all my pieces together in a box, and we headed outside to assemble it all.  (I brought a snack out for Aidan, which ended up being a HUGE help, because it kept him busy if there was a part I needed to stay busy during.

I gave him the manatee coloring sheet to color gray while I set up a little better.  I taped the brown paper on two corners to make the "land".  Next, I gave Aidan the mangrove trees, and he could put them wherever he wanted (the grow in the water, but then over the years, they become the island, so there was really no "wrong" place to put them).  I hot glued them in place.  Next, I gave him the "rocks", which he again could stick wherever.  After that, I cut the Easter basket filler and twisted it at the bottom to make it sea grass, and he glued that in place too.  Then, I put some glue along the edge of the land, and we poured some sand from the sand box on it.  (I may not have done this step again, in retrospect, the sand was still wet from hurricane Matthew, but Aidan had fun with it, so I guess that's a win.)  After that, I lost him to the slide, a stick and a ball, haha!

So while he played, I put tissue paper on the branches of the trees, cut out the manatees, and numbered them 1-9.  The manatees got him interested again, so he came back.  Every time he picked up a manatee, I would say something like "yeah, that's the number 7"!  I helped him put them in order, and then let him put them in groups of mommies and babies. <3  He brought over a piece of palm branch, which he decided was seaweed, and a branch or two.  We talked about the mangrove trees, the seagrass, and things like that.  It was a really fun activity!  If you decide to make your own habitat, you can send pictures of it to savethemanatee.org! 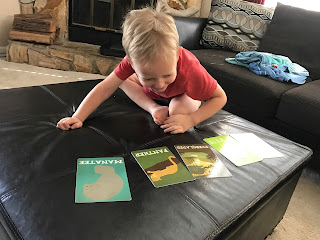 I ordered Aidan these flashcards back when it was a Kickstarter project, and I love them so much!  The momtrepreneurs who started this business make flashcards focusing on key elements from different states.  I love love love the concept and the execution.  So we have the Florida set, which of course features manatees.  These cards are really well-made, and I love supporting a small business like this one! 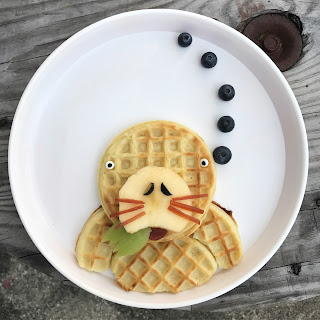 For this breakfast, I used two waffles, a slice of apple, blueberries, kiwi, fruit leather and candy eyes.  I cut one of the waffles to make the body (because manatees are shaped so uniquely), and then cut up all the other pieces to come together to make the manatee.  I have to be honest, Aidan didn't eat the waffles, but he did eat everything else (and the rest of the apple), so I'd say it was a win! 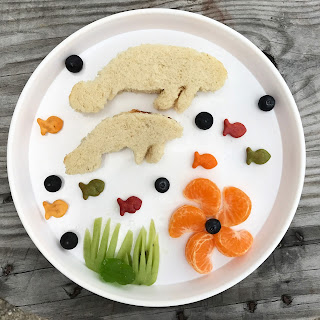 For these sandwiches, I printed and then cut out a manatee template.  I then cut that on the sandwich, and cut around it.  Then I just made a starfish out of mandarin segments, seagrass out of kiwi, stuck some goldfish and blueberries around it, and hid a gummy frog (which of course was the first thing he found). 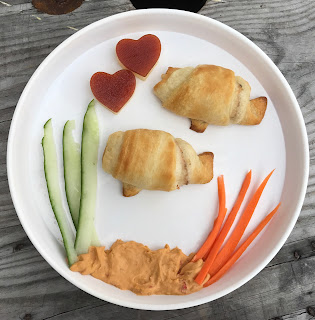 You have to use your imagination a little for this one, but it works, haha!  I rolled a slice of chicken lunchmeat and cheese in each Pillsbury crescent roll, and tried my best to shape it like a manatee,  While they were baking, I put humus on the bottom, for the sea bed, then cut up some carrots and cucumbers for the coral.  It was supposed to be a baby and mama, so I used a cookie cutter to cut hearts out of apple slices, and topped it with fruit leather heart too.

1. M is for Mountain 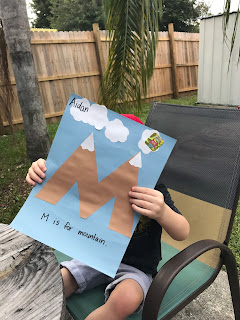 Manatees don't look like the letter M, sorry.  So we went with mountain instead.  Slovenia has a lot of beautiful mountains, so I thought it was best to get him acquainted.  I cut out the pieces, and then we put them all together. 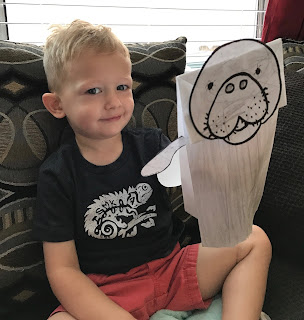 I found this cute manatee craft on savethemanatee.org.  All you need is to print out the cutout sheet, and have a paper lunch bag.  Color it all gray, cut it out, and glue it together!  It's super cute!

I love this book!  I bought it for my classroom, and just couldn't part with it.  It's about a mama and baby manatee migrating to warmer spring water.  The illustrations are realistic and beautiful.

We got this book for Aidan when we were at the Tampa Lowry Park Zoo.  It's cute, and has a lot of interesting facts for kiddos.  Aidan likes counting the manatees in each picture. 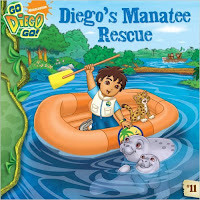 I thought this book was really!  I liked it a lot better than the Go Diego Go episode that is also about manatees.  It follows Diego as he reunites a mama and baby manatee.  It's interactive, which Aidan really liked! 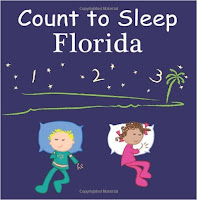 This is a sweet bedtime counting book that highlights different things about Florida, one of them being manatees, of course.  The numbers are large on each page, so we practice tracing them.

1. Octonauts Season 2, Episode 19 (on Netflix, it's season 2, episode 10) - The Octonauts save a group of manatees from a lightning storm.

2. The Cat in the Hat Knows A Lot About That, Season 2 Episode 6 - A sweet episode where the kids and the Cat in the Hat go on an adventure to learn about manatees.  Like so many other manatee stories, it's about a mama and a baby!

3. Go, Diego, Go! Season 3, Episode 315 - In this episode, Diego tells a manatee a story about mermaids, and manatees, and how mermaids used to be manatees... it's all read from a "storybook", but for someone as young as Aidan (and most Diego viewers), I think it's a little confusing as to which creature is real, and which isn't.  (I bought the episode on iTunes for $1.99)

4. Veggie Tales Silly Songs With Larry - Barbara Manatee
We watched this classic on youtube.  Aidan liked it well, enough, but I loved the nostalgia of it all!


So, that was our AMAZING manatee week!  We had fun, and I'm so glad my sweet boys shares my love for these amazing creatures!

Posted by Serendipitous at 9:37 AM 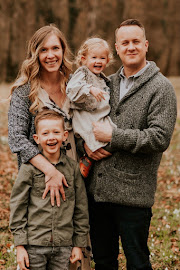