We recently found out that Aidan could read "zoo".  What!?
Dan gave him his zoo membership card to play with, and Aidan looked at it, and said "zoo"!  Dan said, "He read zoo"!  I said no, he did not, he probably just recognized the logo.  Dan insisted, so later that evening, I wrote out the word "zoo" on a piece of paper, and asked Aidan what it said, and he promptly said, "zoo"!  I asked him what letters he saw, and he said, "z, o, o"! So, I knew he actually knew what he was doing!  Crazy!  I mean, I know he didn't sound it out, and he recognized the word, but still.
So, I decided it would be a great time to focus on "Z"! 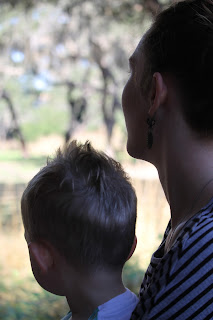 One of our supporting churches very graciously gave Aidan some money back in April, to use in however way he would like.  A few weeks ago, we were able to take Aidan to Animal Kingdom at Disney World.  We honestly had the time of our lives!!!  I was a little worried that Animal Kingdom was just going to be a glorified zoo, but it was so much more than that!  One of our favorite things was the Kilimanjaro Safari. 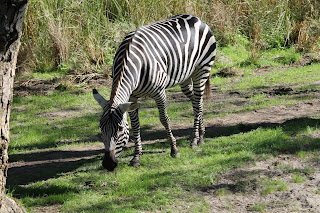 One of our favorite animals to see, was naturally the zebra!  We got to get up very close and personal, while bumping along in a jeep-type vehicle.  We sat in the very back row, which gave us the added benefit getting to look out the back uninhibited. 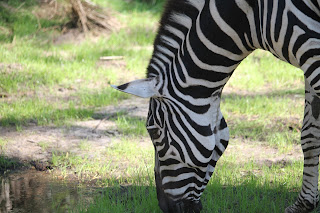 Animal Kingdom as TONS of acreage for these animals, which sets it apart from other zoos.  Walt Disney and Disney corporation are actually widely known for their conservation efforts, so you get to learn a lot about that on this "ride" as well as other parts of this park. 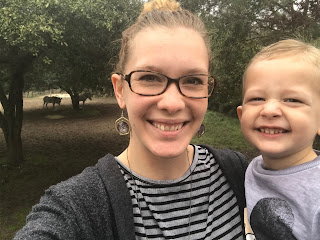 While Dan was visiting his mom last week, Aidan and I went to the (you guessed it) zoo!
Our membership is up mid-January, and since we don't plan on being in the States for too much longer, we decided not to renew our membership. 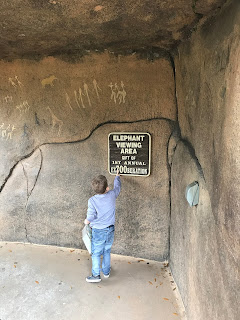 So we're trying to get as much use out of it as we can.  When we visited the elephant exhibit, I noticed a sign where the word "zoo" was enlarged, so I asked Aidan to go "spot the Z", and he did right away! 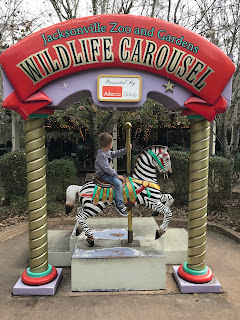 Didn't want to pay for the carousel (which, if you ask me should be included in the yearly membership, but that's another matter), so I let Aidan sit on this one.  Mother-of-the-year award goes to me! 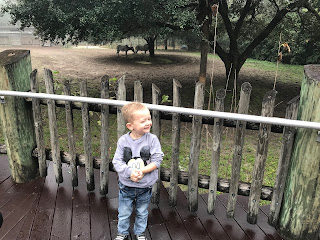 We talked about what colors we saw on the zebras: black and white. 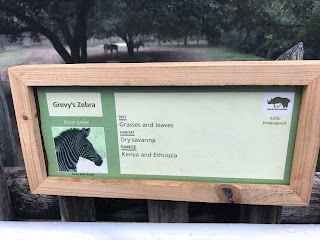 And of course, we (I) enjoyed reading the plaques, describing the zebra's habitats. 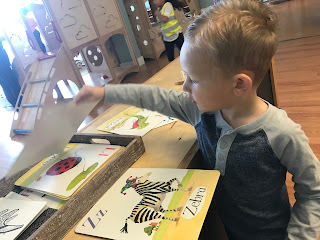 If you've visited my blog before, you know that we very much enjoy this indoor play space in our city.  It's kind of like gymboree, but SO much better!  We go a couple times a week.  We get there as close to opening as possible, and stay until about noon.  This week we looked for all the "zebra" things.  We found this flashcard, a pull-toy and some other"safari" themed toys. 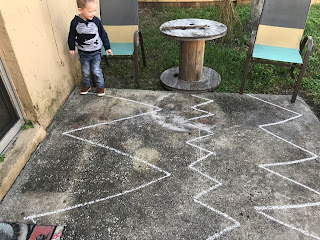 For this activity, I drew zig-zags in three different sizes, with chalk.  Then we talked about which one had the biggest zigzags, the smallest, and medium.  Then I modeled for Aidan how to walk on the line.  It proved a little more challenging than I'd thought. 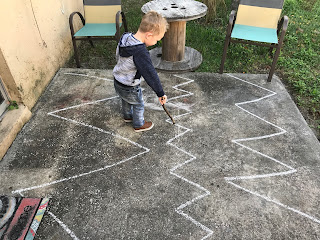 My boy loves sticks, so when he lost interest, I gave him a stick and had him "trace" the "Z"-s with it.  I think he liked the scratching sound, and felt like he was getting away with something, haha! Okay, so this has nothing healthy about it, or really anything creative, but I saved it for an after-dinner-dessert, and we all love a treat every now and then.  For this, I used 2 Little Debbie Zebra Cakes.  I used one for the body, and then cut the other one (carefully) to make the head, neck, tail and legs.  Then I used a candy eye. 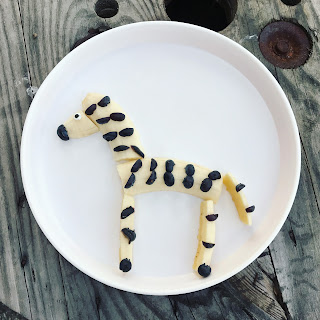 For this cute snack, I just used a banana and and some blueberries.  I cut up the blueberries as thinly as I could (they were starting to get more ripe, so that was more challenging than expected).  I cut the banana in half long-ways, and then just cut pieces to what I needed.  Put it all together, added a candy eye, and we're good! 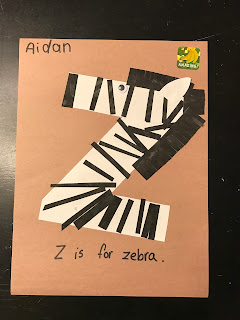 For this addition to our Alphabet book, we used a brown piece of paper (I was debating between green or brown for the Savannah, but liked how it looked on brown).  I cut out a white "Z" and ear,  then black strips, and some fringe.  Next, I helped Aidan assemble it all (as you can see by the not-straight Z, which was SO hard for me to leave that way).  Even though technically zebras are black with white stripes, they LOOK white with black stripes, so that's what we went with.  Add a googley eye to complete, and you're done!

1. A to Z by Sandra Boynton 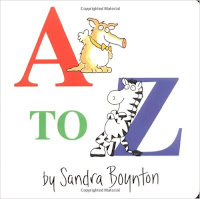 This is Aidan's favorite alphabet book, and he knows most of the animals' actions by heart.  Lucky for us, there aren't many animals that start with "Z", so chances are, an animal alphabet book will feature zebras.  In this particular one, zebras are zig-zagging.  Even more perfect!

2. Z is for Moose by Kelly Bingham 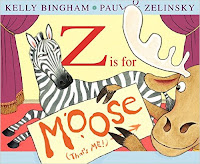 This is a cute book I loved to read to my Kindergarteners.  Its about the zebra going through the alphabet, but the impatient moose can't wait for his letter, and keeps asking if it's his turn yet.  Then, when it finally comes to "M"... well, I guess you'll just have to read it. :)

Did you know that zebras bray?  Well, read this book, and you will!  Also, flamingos flute, and so many more!  A fun book about animals, and the sounds they make!

1. Khumba - this 2013 South African animated movie is very cute! It's about a zebra who is born with stripes only on the front half of his body, so the other zebras think that the drought is because of him.  So, he sets off on a quest to get stripes.  What is (I think) very interesting about this, is it is homage to an actual subspecies of zebra, which had tripes in the front, but was plain brown in the back.  This species went extinct in the 19th century, and a scientist recently tried to use DNA samples to recreate this extinct animal, but to no avail.

2. TingaTinga Tales - Season 1 Episode 24 - I've mentioned this show before, but incase you aren't familiar, this is a great African animated series that uses folk tales about how animals got their unique features to teach lessons.  They are on Netflix.

3. Wild Kratts - Season 1 Episode 27 - Zig-Zagged - in true Wild Kratts fashion, this is a great episode, that teaches fun facts about the zebras (like they're actually black with white stripes).  You can find it on youtube, or on Amazon Prime.

4. Lion Guard - Season 1 Episode 12, The Mbali Fields Migration - this new, Disney Jr. show is the continuation of the Lion King story.  It is about Kion, who is Simba's son, and follows him and his friends who form the Lion Guard, which protects the circle of life.  In this particular episode they are helping a herd of zebras and gazelle find new grazing ground.
SaveSaveSaveSave
Posted by Serendipitous at 8:14 AM