Boys and volcanos, what two things could go together better than that?  So this week, we did "V is for Volcano" and had a blast! 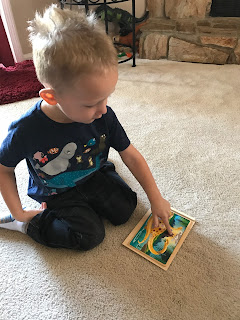 A dear family from a church that supports us sent Aidan this super-cute dinosaur puzzle set by Melissa and Doug.  Thankfully for us, volcanos and dinosaurs go together like peas and carrots.  We spotted the volcano in the one, and it made us very happy! 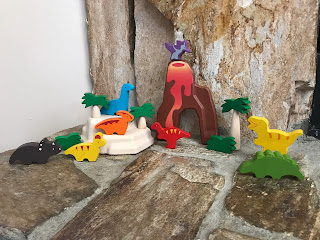 Aidan got this adorable dinosaur play set for his birthday.  You can find it here.  As many plastic dinosaurs as there are in our house, I actually much prefer these wooden ones.  And, of course it came with a volcano!! 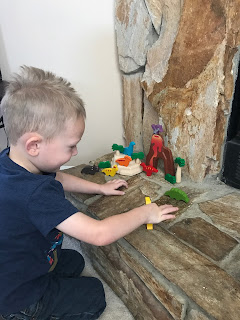 Aidan knows the names of these dinosaurs better than most adults, let alone 3-year-olds! 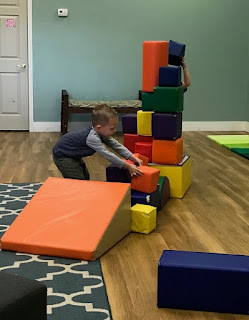 If you've visited my blog before, you know that we often go to an indoor play space, called Bay & Bee.  This week, they added some more foam building cubes, which was perfect!  He and the other kids built a volcano, and then... 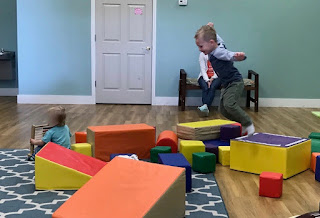 Of course had to jump from rock to rock, to avoid falling in the lava.  Obviously.  Priceless childhood memory - check! 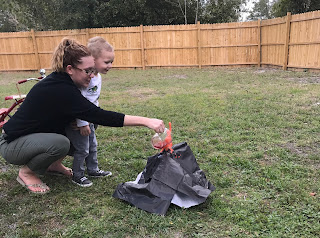 You know that experiment that everyone does in elementary school?  We did it, and it was awesome!  For this experiment, we put baking soda in a bottle, covered the bottle with black tissue paper (which didn't really look like a volcano, but that's all I had). 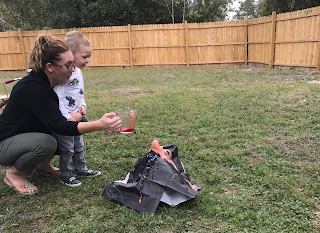 In a separate container, I put vinegar and red dye.  Then, we poured it in, and watched it erupt!  I would've let Aidan do the pouring, but with it involving vinegar... I decided not to.  Aidan talked about it for the rest of the day! 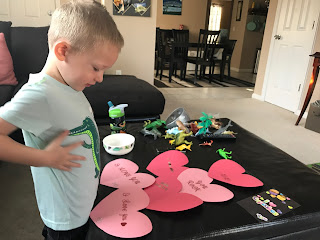 We can't be talking about the letter "V" in February without making valentines!  I found my old scrapbooking stickers, and wrote out a couple things, then had him put stickers all over them, and color them within an inch of their lives. :) 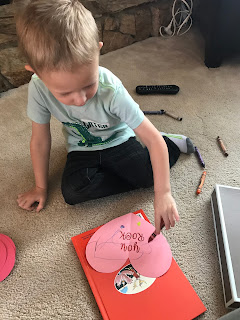 He had lots of fun, and who doesn't love getting a valentine from an adorable 3 (!!!) year-old! 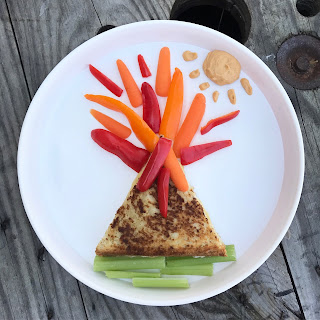 I made Aidan a grilled ham and cheese, then arranged the veggies to make it look like it was erupting.  He liked the carrots, as always, but wasn't a fan of the bell peppers.  But at least he tried them! 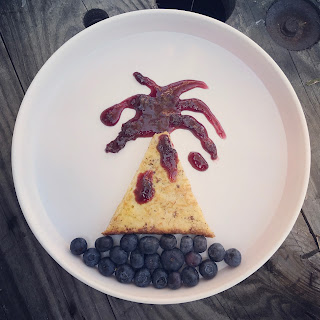 For this yummy breakfast, I made french toast, put some blueberries down, and then made the jam "erupt" out of the top.  Aidan is a big fan of French toast, so this one was a huge hit! 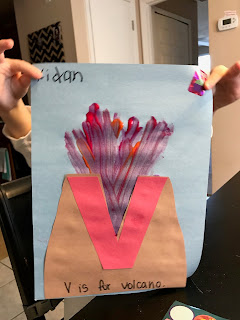 For our weekly letter, we painted some lava, then glued the top of a volcano, and the letter "V".

Okay, so I dropped the ball this week.  Dan was out of town a lot, so we were without a car, so no library for us.  We DID read books, we read all our dinosaur books, because most of them have volcanos in them.  Here are some of our dinosaur books: 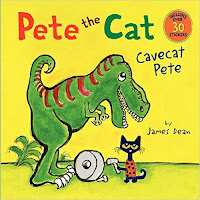 We love Pete the Cat around here, so this book is a natural addition to our personal library!  It's about Pete the Cat and his dinosaur pals. 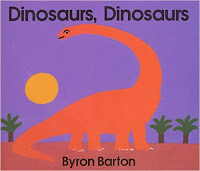 Another favorite around here!  A great board book that Aidan "reads" to himself.

I love this book!  I found it at our school book fair one time.  I wish there were more books like this - maybe for colors, shapes, etc.  It helps kids with fine motor skills, along with teaching them about dinosaurs!

1. Magic School Bus, Season 2 Episode 1 - The Magic School Bus Blows its top - this episode is on Netflix (as of right now).  It's about how islands are formed from erupting volcanos.

2. Magic School Bus, Season 2 Episode 4 - The Magic School Bus and the Busasaurus - this one is about dinosaurs, but there's a volcano in it that "un-erupts" when they go back in time.

3. Elena of Avalor, Season 1 Episode 3 - All Heated Up - Aidan is IN LOVE with Elena.  In case you're not familiar with her, she is a new princess on Disney Jr. Channel.  This episode is about a magical character named Charoca, who lives under/near a volcano. When he gets angry, the volcano starts to erupt.  It's a good conversation starter about anger management, and dealing with negative emotions.

We had fun this week learning about volcanos, with some dinosaurs thrown in.  Hope you enjoyed it!

Posted by Serendipitous at 9:12 AM