I found a terrific book at a book fair back when I taught Kindergarten, where if you read it from one end it was about polar bears, and from the other end it was about penguins.  I loved how it represented the two poles, and that they both start with "P"!
It felt like the perfect way to learn about the letter "P". 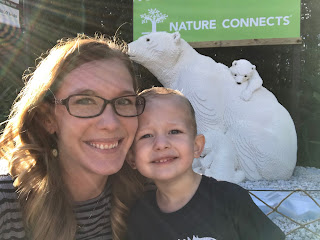 Sadly, our annual zoo membership is up as of today, so we wanted to make sure we went one last time.  Our zoo happened to have a really cool Lego exhibit!  Right when we walked in, we saw this amazing polar bear mama and cub!  It was perfect! 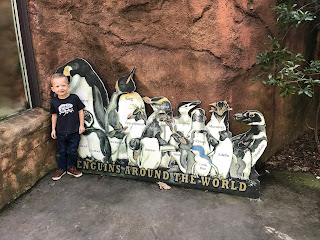 I love this life-sized poster by the penguin exhibit!  It has all the penguin species on it! 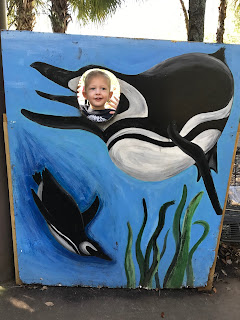 I love his sweet face! 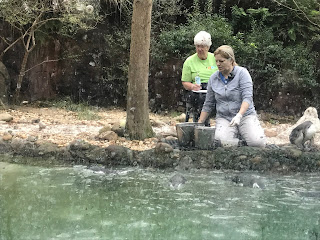 We were there a couple weeks ago, and actually got to see the penguin feeding!  (We saw it this time too, but the glass had too much condensation for good pictures.) 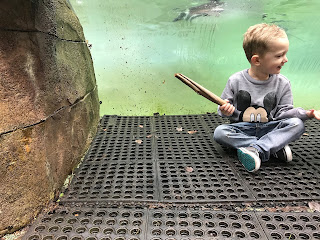 And this happened last time, too!  There's the handsome sire in his tuxedo! 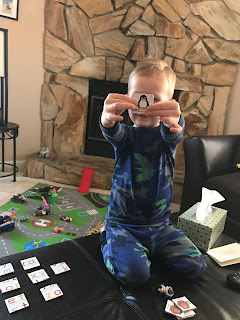 I made this animal matching game a few weeks ago, and thankfully it had many of the animals we've learned about since in the packet.  I usually start with 6 pairs, to help him get how the game goes, and then add a pair each time.  It's a great way to practice taking turns and patience. :) 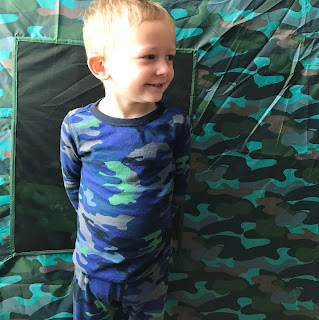 A lot of animals use camouflage, and it's a word Aidan has heard plenty, but when he got these pajamas that look so much like his play tent, I couldn't pass it up!  I've never really thought about penguins having camouflage, but this week we learned that they do!  They have dark backs, so they're harder to see from above, when they're swimming, and white bellies so they're harder to see from bellow!  Pretty amazing, huh? 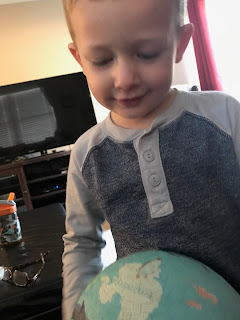 We got this adorable ball that is a globe, complete with animals from each area.  We found Antarctica, and lo and behold - there was a penguin!!!  So we practiced waddling like a penguin, pecking and "building a nest".  He is precious! 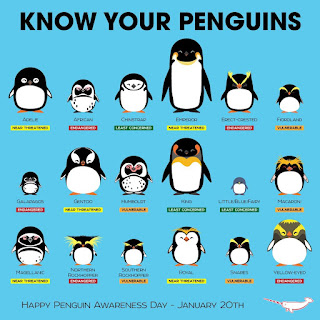 I found this chart, and although the illustrations are very cute, it deals with a more serious issue, of endangered species.  I printed it out, and glued it to black paper for him to look at.  I also glued the picture of him with the penguin chart from the zoo on the back. 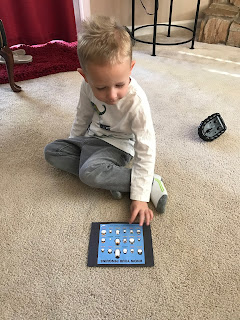 We talked about how we need to take care of our earth, so that penguins can have long and happy lives. 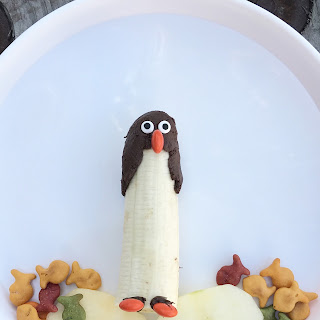 This snack ended up looking way more inappropriate than I meant it to, so I cropped it a little, haha!  For this snack, I used half a banana, dipped in chocolate (which did NOT melt well), added candy eyes and M&Ms, had him stand on an apple slice ice berg, and surrounded by his favorite snack, fish! 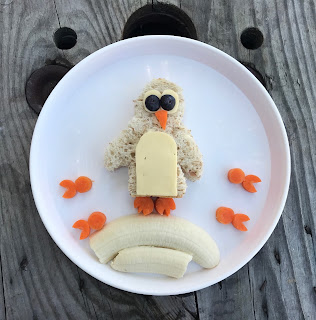 This little guy looks more like an owl, but oh well.  I printed out a penguin clipart, and then cut the sandwich to the same shape.  I used cheese for the belly and eyes, blueberries for the pupils, carrots for the fish, beak and feet, and a banana for the ice berg. :) 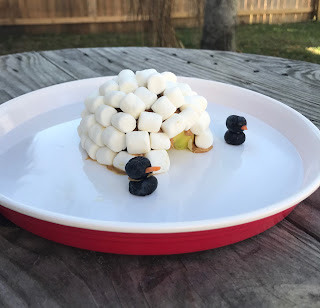 I know igloos are from the Arctic, and penguins would never be near them.  BUT I couldn't help it.  It was so cute!  I cut an apple in half, then sliced it up, covered it in peanut butter, and put marshmallows all over it.  It ended up being more marshmallows than I'd planned, but he didn't eat them all, so that's good, haha!  I used two blueberries and a little slice of carrot for each of the penguins. 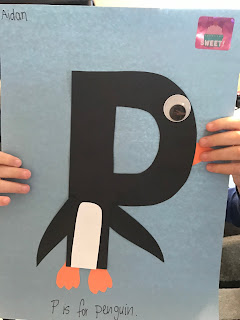 Aidan already knew the letter "P", so that was exciting!  For this craft, I cut out a black letter "P" and flippers, a white belly, and orange feet and beak.  Aidan put it all together, and of course used the biggest googley eye he could find!

1. Penguins Close Up by Andrew Kelly 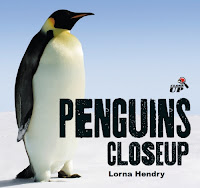 I got this book back when I taught kindergarten, and I love it!  I love it, because from one end of the book it's about penguins, from the other end it's about polar bears!  Like the opposite poles!  It's fun for visual learners like me, haha! 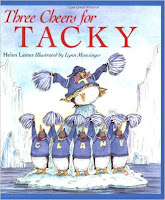 This is a cute story about including others, even if (especially if) they're not like you!

3. Without You by Sarah Weeks 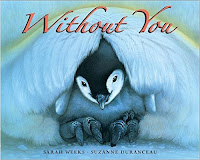 The illustrations in this book are beautiful!  It has sweet, simple text, with engrossing pictures!  Love it!  It talks about how the mommy and daddy penguin take care of the chick.  This gave a great opportunity for us to talk about how Aidan's mommy and daddy are a team too, and how it's great to work together!

1. Octonauts, Season 2 Episode 2 - The Adelie Penguins
This episode is one Netflix. It's about the Octonauts helping out some Adelie penguin parents, by babysitting their chicks.

2. Penguins - Spy in the Huddle, by BBC
This is a 3-part documentary on Netflix about penguins.  Be forewarned, this is just a regular documentary, not specifically for kids.  There is talk of mating (although nothing is really shown, the male lays on top of the female), and birds of prey do get one egg, and there's a baby penguin that freezes to death.  So, it's up to your discretion whether or not your child can handle it.  In our case, it kinda went over Aidan's head.

3. Storybots app - Letter P video
If you haven't downloaded the FREE Storybots app, I highly recommend it!  It has all kinds of learning videos, ranging from letters, to dinosaurs, to gravity, and days of the week.  It's a perfect distractor when needed, and I don't feel guilty about it, because it's all educational.  The letter "P" video actually starts with penguins, so that's pretty great!
Posted by Serendipitous at 12:39 PM