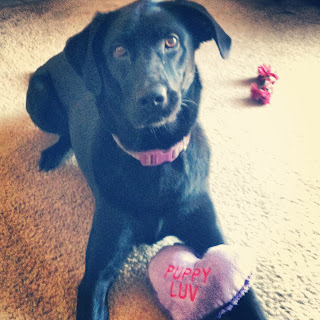 I love my dog.  Too much.  She has more toys than some children, and gets more love than a lot of people.
I just can't help it, she is so cute, and cuddly, and I don't know what to say, except "don't judge".  She's adorable.  "Nuff said.

So, my Bella turned 1 on February 28th.  (We think. - The people we rescued her from were sketchy on her age (among other things), so we tried counting back.  With our math skills, we're probably way off, but she's a dog.  She won't know.)
I wanted to make her some pupcakes (cupcakes for dogs), but I wanted to make them out of normal, "human" ingredients, so that I wasn't making a dozen cupcakes for a 55 pound dog.
I looked around online for a recipe, and found this one:
melssweetlife.com
I liked the look of it, and I already had most of the ingredients.
Here's what this recipe called for:

Instructions:
Here are some of my tips for this recipe:
I followed the recipe, the only problem was my bananas weren't ripe enough, so it was hard to measure out the right amount.  I simply put in one banana.  If I were making this again, I would use two bananas.  I would maybe add some applesauce too.  As for the frosting, since this is for a dog, I wouldn't use as much confectioner sugar, and probably add more peanut butter.  Those are my only suggestions though, they came out nicely, a little more "muffiny" than "cupcakey", but I think more banana and applesauce would've helped with that.

Well, Bella loved her pupcakes, and of course like every kid, she licked the frosting off first, and then ate the cupcake part. :)  I've ruined her now though, because whenever she sees me open my cupcake container, now she thinks she's getting a treat.  Also, she learned a new word: "cupcake".


So, happy-happy 1st birthday to my Bella-baby!

If you're looking for this recipe for your doggie, I would recommend it, but I would make a couple changes to the initial recipe.  Good luck, and happy baking!
Posted by Serendipitous at 5:51 PM