Let me tell you a story about one of the most spectacular ladies in history, Mary.  She was the second oldest child in a family, that lost their mother and oldest sister in war.  She raised her siblings, and when they were out of the house, she got a professional job.  In her 40-s, she met a divorced man, they exchanged letters, and eventually got married. There was one thing that she felt was missing in her life.  A family of her own.
Skip forward about a decade.  A young couple with a 10-month-old baby leave their lives and families in the States, follow God's call on their lives, and move to Hungary.
They were taking language classes, and needed to find a lady to watch their baby during the day.
Enter Mary.  Varosi Marika, really, but she told them to call her "Mary".  She not only took care of their baby, she loved on her, and on them, she sang to her, read her her favorite stories over and over again, swung her, until she could swing no more, took her into her heart, and didn't let go.  And then, her two brothers came along, and their family was complete.

God gave a woman who was created to be a mother 2 children and 3 grandchildren.  He gave a young family in a new place the love and guidance they needed.  That, and good food...

So, here is my Mary's Paprika Chicken recipe.  My family's secret recipe.  She taught my mom how to cook Hungarian food, and I was happiest when sitting on her counter "taste-testing" her home-cooked goodness.

This Sunday, our church is having their "Food Fest", where everyone brings dishes from their countries, or family recipes, so I decided to share this dish with my FCCC church family.
It consists of two parts, the chicken in the paprika sauce, and the dumplings (nokedli).

Directions:
Cut up the chicken breasts into bite sized cubes (traditionally Hungarians will use the legs, and whole breasts, but Mary and my mom adapted it a little to be kid-friendly, and I like it better this way).  Chop the onion as finely as possible.  The first time my mom made chicken paprika with Mary, she cut up the onion "finely", and showed it to Mary.  Mary said "are we feeding the army?".  My mom said "No", and Mary said, "Well, then it needs to be chopped finer".  Mind you, Mary is not a critical lady, but if she says the onions need to be chopped finely, they do.  You may feel like you want to use a food processor, however my mom said she tried that one time, and it didn't work, because the oils and the liquid from the onions separate from the actual onions, and it doesn't have the same taste.
Pour 1/4 cup of oil into a pot, put on med/high heat.  Once hot, add the onions. 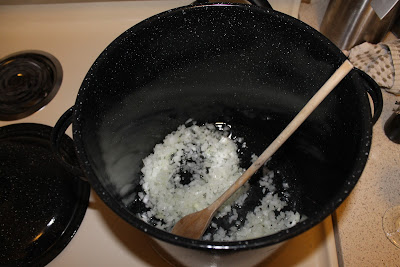 Stir them around in the oil until fully cooked through, but make sure not to brown them, it'll give your paprikas a burnt taste. 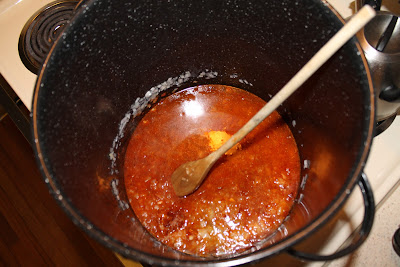 Once they're cooked through, TAKE OFF HEAT.  This is important, because you're going to be adding the paprika, and it can burn easily if added while on the heat.  Also, at this point, you can add the 1 1/2 cup of wine.  Put it back on the heat, and bring to a boil.

When it reaches a boiling point, add the chicken.  Mix it around, until the chicken doesn't look raw anymore.

When you've achieved that, cut your two tomatoes and two pepper in half, take the seeds out of your peppers, and simply place them on the top.  Use medium sized tomatoes.  I used some large ones, and they let out too much juice. 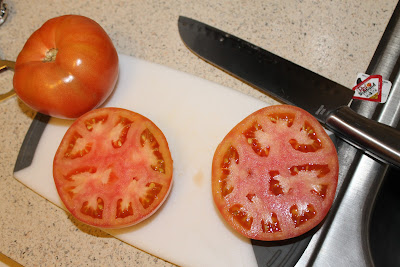 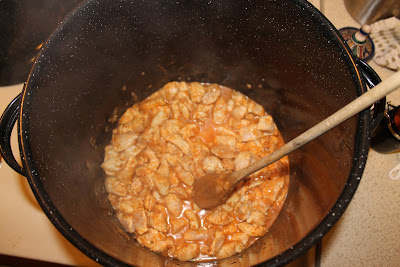 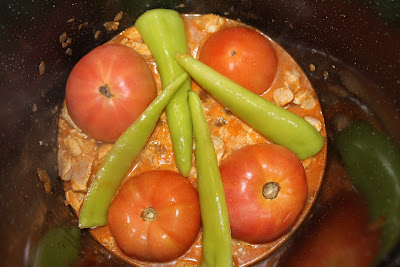 Put the lid on the pot, change your heat to a medium heat, and set your timer for 30-40 minutes.
When the chicken is cooked all the way through, take out the peppers and tomatoes.  Then add the sour cream to the chicken.  That's it!

Start working on your dumplings. 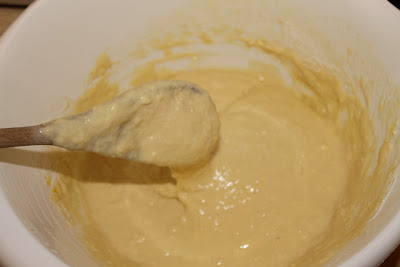 In a mixing bowl combine flour, eggs and water.  Beat well, and adjust measurements until the mixture doesn't "drip" but rather "tears" or "plops" off.
I have a nifty dumpling cutter that my mom gave me, but I'm not really sure where you can get one.
Bring a pot of water to a boil, add salt and vegetable oil.  Then, set the dumpling cutter on the top of the pot, pour some of the mixture into the cup part, then start moving the cup back and forth, until all the dumplings are cut, and in the boiling water. 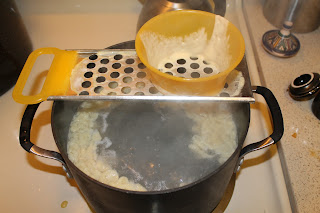 When the dumplings raise to the surface, wait just a few seconds longer, and then fish them out with a hand-held strainer or one of those serving spoons with the holes in them.
Place them in a dish, and drizzle a little more oil on them, to keep from sticking.
And you're done!
So, that is the story of a woman created to love with a mother's love, and the family that was blessed enough to be on the receiving end of it.  And were happy to eat her scrumptious food.
Posted by Serendipitous at 7:00 PM