I love Dr. Seuss.
I know that's not a huge confession, as most anyone who's ever read any of his books feels the same way, however I REALLY love Dr. Seuss.
And like I've said before, give me theme, and watch me go wild.

Firstly, I wanted to do my nails in Dr. Seuss fashion.  I checked online, and found many cute ideas, and then realized, I didn't have any of the colors.  However, I do have the most thoughtful husband around. While at Target running some errands, he bought me 3 Dr. Seuss books, as well as matching nail polish.  So, that problem was solved.
I'm not very good at doing my nails yet, it's mostly just something I do while I'm watching TV or something.  So, I don't have a tutorial for the nails here.
All I do, is paint my nails a solid color, and then with a toothpick, I paint on any extra details.
This is how they turned out:
After that, I had to think of some things I could do to decorate my classroom.
I saw an idea on decorating a class door in Truffula trees on happymrsc.blogspot.com.  It didn't say how she made the trees themselves, so that's where my creativity had to come into play.

I found some great, colorful tissue paper in our resource room, and got to work.  I folded the paper on top of itself, then cut the paper into about 2 inch strips, cut it like you would cut grass for a craft.  Then I would open it up, and fold it back onto itself, like this: 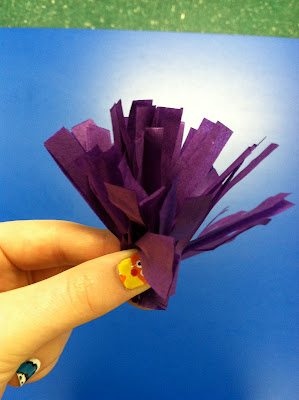 Then, I just started taping away, until the trees were the size I wanted.  Then, I added some black construction paper trunks, added some white stripes to them, and they were done. 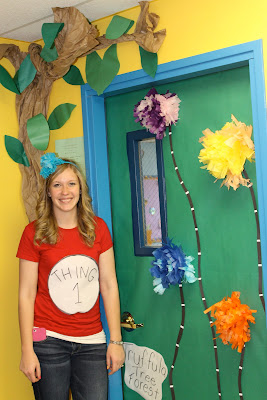 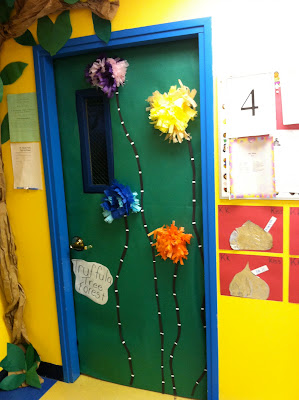 The teacher in the room next to me, who is wonderful, and we do lots of things together, made a Lorax on her door, who is pointing to the Truffula forest on my door. 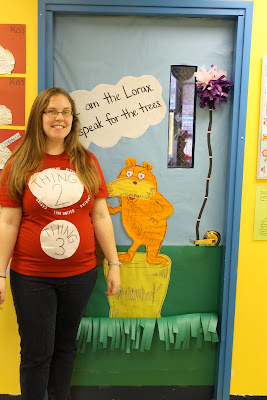 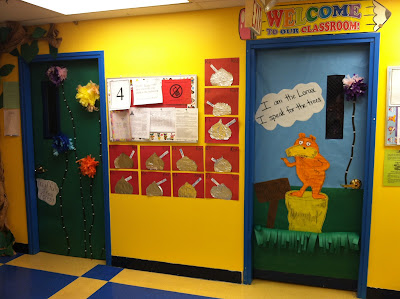 THEN, our director asked me to make Truffula trees on the bulletin board in our drop-off room, which is a total "no-man's-land".  I was happy to do it, and perfect my Truffula tree technique.  Again, my wonderful husband came to the rescue, and came to help me out.  More cutting, taping and stapling, and: 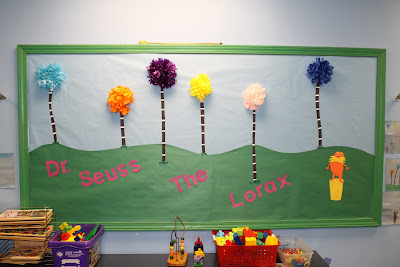 Next, I needed to come up with something for my students to do.  That bulletin board looked like a perfect backdrop to me.  Also, I've been intrigued by the hipster mustache and bow tie craze, and I finally had a way to incorporate it into my lesson plans:

Dr. Seuss hipster photo props!
I found the original idea on blog.kidzui.com and then decided to make it my own.

Here's what you'll need:
Poster board (the number of kids you have, or size of your props will determine how much you'll need)
Pencil
Black Sharpie
Paint (orange, yellow, red)
Large Popsicle sticks
Tape

I drew out with pencil the outline for mustaches and bows.  Then I traced it with black sharpie.  I had the boys cut out the mustaches, and the girls cut out the bows.  Then, the boys painted their mustaches orange or yellow (even though, the Lorax's is yellow, I wanted to add just a little more color), and the girls painted their bows red or red and white striped.  After that, I taped the popsicle stick to the back, and voila!  Hipster Dr. Seuss photo props!  You could use this idea for a class party, like I did, or even a birthday party photo booth!  How cute would that be!? 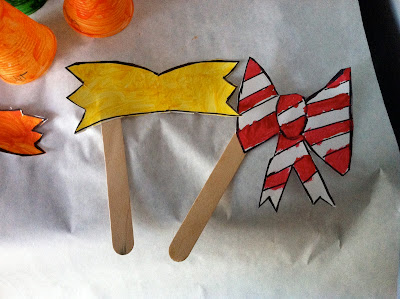 Now that all that is done, let's party!
But wait!  What to wear, what to wear...?
If you know anything about, you are well aware of the fact, that I will pounce on any chance I get to dress up.  I'm not sure what it's rooted in - cough, cough - mom!!!
And because of said culprit, I am always partial to home made.
So, when I decided I was going to be "Thing 1", I got cracking.

I found a red shirt for under $4 at Walmart, which I was very happy about, and even went back and bought it in a couple other colors, because it was comfortable, and nice and long.  Then, I found some great, heavy-duty white felt, for only $2.77 a yard.  Once home, I traced a circle onto the felt (I used a dinner plate as a guide), traced over it with black sharpie, and wrote "Thing 1" on it (I would suggest writing it in pencil first).  I had roped the same teacher from earlier into being "Thing 2" with me, and she had the genius and adorable idea of adding "Thing 3" to her growing baby bump.  So cute!  So, I also traced hers.
Then I cut it out, and because I wanted to be able to reuse the T-shirt, I only pinned it to my shirt. 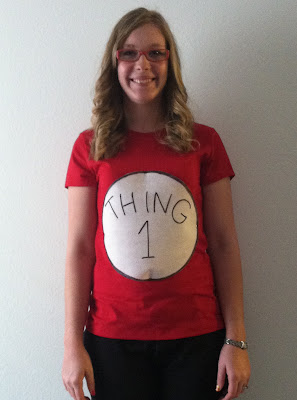 Next for the hair.
I found a great yarn wig tutorial on www.u-createcrafts.com, but decided it was a little more involved than I wanted.  However, I will be keeping this in my arsenal, I'm sure I will need it one day.
I decided to go for something a little more wearable, and cuter.  I have this clear, plastic hairband that I've had laying around for ages.  Also, I had some blue yarn (that was the perfect color) and some more of that tissue paper on hand.
First, I covered the hairband in the blue yarn, using a hot glue gun, which wasn't really necessary, I just wanted it to look "finished".  Next, I did the exact same thing to the tissue as I did for the Truffula trees, and glued it to the felt circle I'd already cut out. 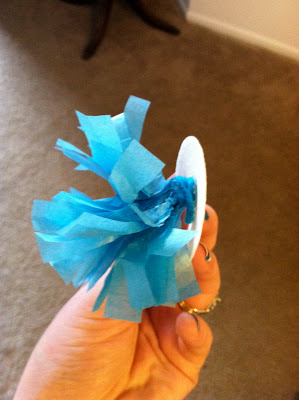 After that, I wrapped the yarn around my fingers: 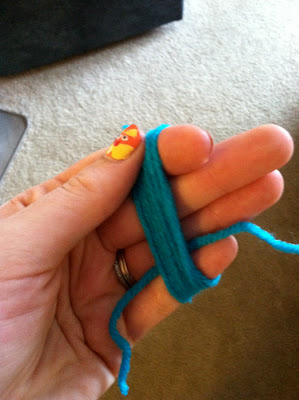 Then, tied it off with a small piece of yarn: 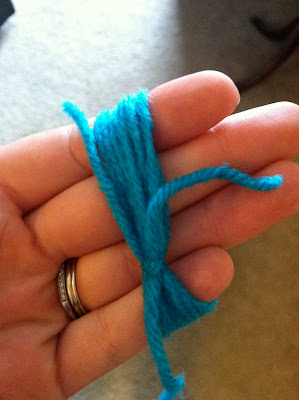 Then cut the yarn on the other side.  Then, I glued that to the felt circle too.  I kept doing that until it was the size that I wanted, and then: 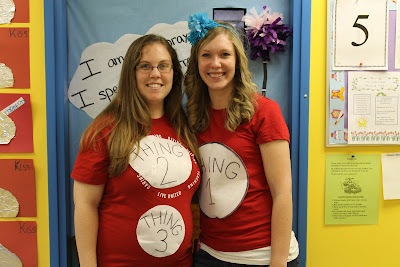 Next, a girl's gotta eat!
I found a super-cute idea on purplecarrotsinc.blogspot.com, and even a couple other places, for
"Thing 1" cupcakes.  It's very simple.  It's just a red velvet cupcake, with a little cream cheese frosting and some blue cotton candy sticking out of it for the "hair".  Now, I'm going to tell you something that the other blogs didn't.
YOUR COTTON CANDY WILL MELT!!!
I made my cupcakes the night before, and everything was going great, I put the frosting on, and then the cotton candy, and they were adorable!  I turned to do some other things, and... when I turned back around the cotton candy had completely melted.  Now, I wasn't sure if it was because my cupcakes were maybe still a little warm (which they weren't, because that would be an amateur mistake, but I was looking into all the possibilities), or if it was the moisture in the frosting.
So, I wiped off the frosting and sad cotton candy.
I decided that I would frost the cupcakes, and then the next day, I would put the cotton candy on RIGHT before I served them.
So, the next day, I took them to school, and hoped for the best.  I did prepare, though for it not to work.  So, I made cupcake toppers.  I took some toothpicks with me to work.  Then I traced circles, went over it with sharpie, and decorated them.  Then, I taped them to toothpicks.  Really simple, really easy, but a tried-and-true way to spruce up some cupcakes. 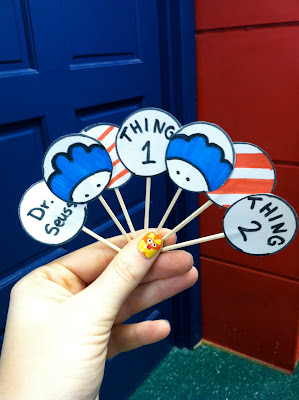 Then, right before the party, I added the cotton candy.  (For the kids, I didn't add the toppers, I figured toothpicks weren't something they needed to have access to)

Here's what I had for the party
(but there are so many more things you could add to a Dr. Seuss party menu):
Strawberry and marshmallow skewers (to look like the Cat in the Hat's hat)
Thing 1 and 2 cupcakes
Rainbow Gold Fish (One Fish, Two Fish, Red Fish Blue Fish)
Swedish Fish (same) 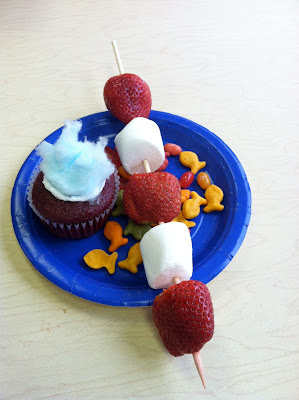 Then, for the teachers (I figured they could handle the toothpicks), I added the toppers.

Posted by Serendipitous at 4:06 PM