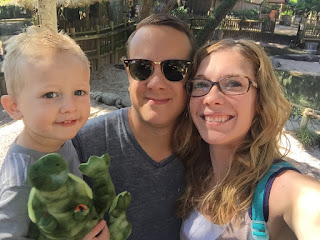 The transition to stay-at-home mom is no joking matter.  For those of us who have had full-time and fulfilling carriers, no matter how much we love spending time with our littles, it is a different speed, with new struggles and responsibilities.
I am very much enjoying not going to work every day.  There.  I said it.  I miss the human interaction, and there are days I just want to go somewhere and not be the responsible adult, but being a kindergarten teacher, that was never an option anyway.
I am loving spending so much time with Aidan.  He has been with a caretaker or in school since he was 6 weeks old, so this is new for both of us.  We both have moments when we look at each other with all the love in the world, and can't imagine being happier.  Then there are moments when we both need to go to our respective time-outs.
The one thing I've found that helps more than anything else I've tried, is staying busy.  So, I got my teacher juices flowing.

I don't want to overwhelm Aidan with stuff, just so I feel productive, and I am aware of the cruciality of free play.  Also, as my mom likes to remind me, he's 2.  So, I haven't planned every day to a T, and we're not doing worksheets, lol.  All I'm doing is coming up with a letter, a number, an animal and a color for the week, and thinking of fun corresponding activities to go along with them.  And then I'm sharing them with you.  It all comes to about one activity a day, for around 30 minutes. 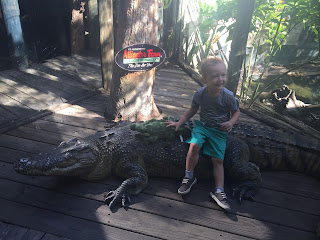 Now, I realize not everyone has an alligator farm within a 60 mile radius.  But, that's actually why I chose to go with an alligator.  I like that it's a "local" animal, and something we could actually go see in person.They had TONS of alligators and crocodiles, and even an albino one, which was Aidan's favorite. 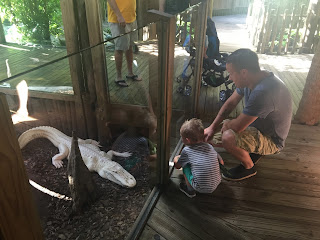 They had a talk on local wild life, which was fun, and Aidan got to touch a turtle and a snake!  Also!  We got in for half the price, because we have memberships at the Jacksonville Zoo.  So, before you visit a zoo if you have a zoo membership somewhere, check on this list to see if it will get you a discount. 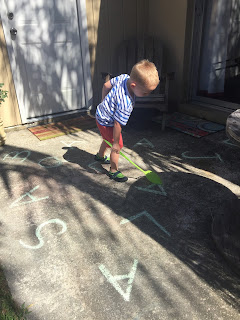 I wrote the letter "A" with chalk a few times on our back patio, and then wrote a few other letters around them.  Then, I gave Aidan a fly swatter, and told him to smack all the A-s he could find.  Here's a secret... STAND BACK!!!  He had loads of fun, and it was a great way to include some gross motor fun!  I'm probably going to do this activity every week with the new letter, he really got a kick out of it! 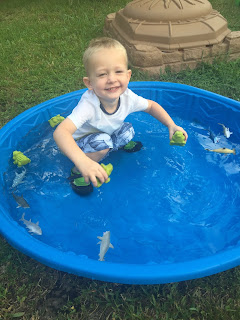 Who doesn't love to play in the pool?  I got Aidan these alligator (okay, so they may be crocodiles, but he's 2, it'll be okay) squirt toys, Dan filled up his kiddie pool, and that's all she wrote!  (Yes, those are sharks.  Salt water crocs and sharks coexist in some places.  Something I learned from Wild Kratts.  You're welcome.) 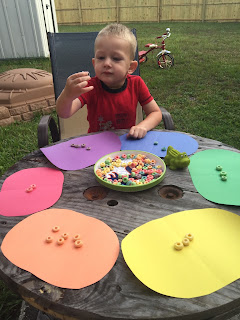 I bought some Fruit Loops, then cut out paper red, orange, yellow, green, blue and purple shapes, and we sorted them.  And then he ate them.  Nothing really to it, and yet it was fun AND tasty! 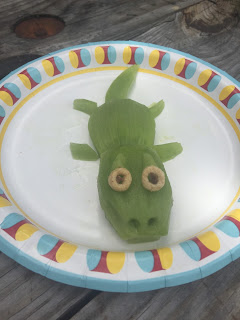 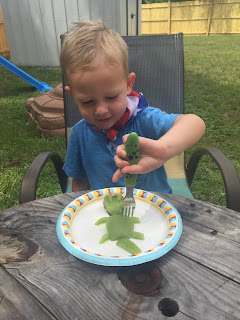 I copied an idea from pinterest.  I used one kiwi, two cheerios, and two tiny pieces of chocolate.  We talked about the color green while he ate. 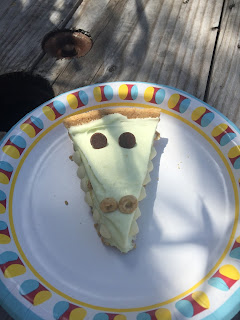 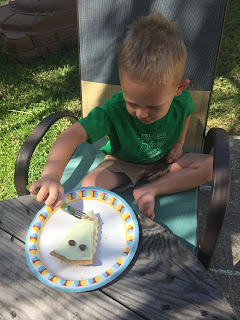 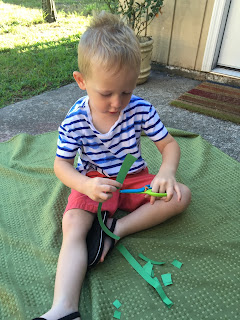 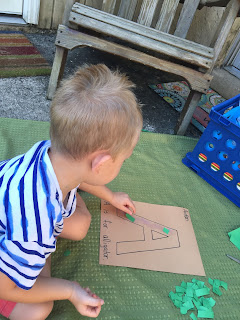 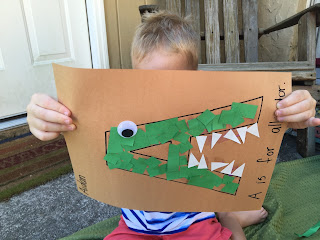 We bought Aidan some toddler scissors (it has a tab you slide, so the scissors open back up after each use), and he did an AMAZING job!  Of course, I watched him and helped him the entire time.  The easiest way ended up being me holding the paper, while he cut.  We also found out, he favored his left hand, which could be interesting (both his daddy and grandpa are left handed, so it wouldn't be so far fetched)!  I wrote out a large "A", then helped him put glue on it, and stick his pieces of paper in it.  He really enjoyed getting to be a big boy, and use scissors and glue, like mommy! 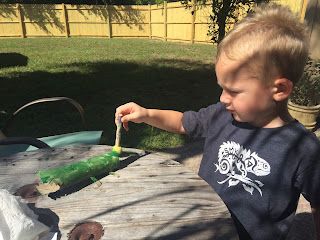 I followed this tutorial, and cut three toilet paper rolls to make an alligator.  Then I let Aidan use finger paint, and paint it green.  Then I glued some google eyes on it, and viola! 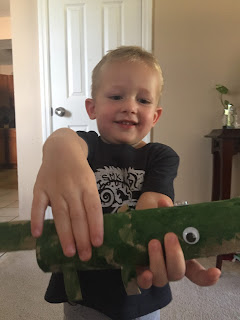 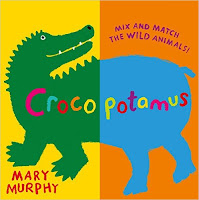 Crocopotamus by Mary Murphy is a fun mix and match animal book.  Yes, that's a crocodile, yes they're different, but for the purposes of this week, we didn't focus on that. 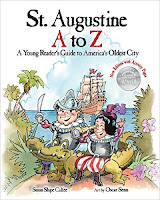 St. Augustine A to Z by Susan Shipe Calfee is an alphabet book based on things found in St. Augustine, which is perfect!  The Alligator Farm is mentioned in it. 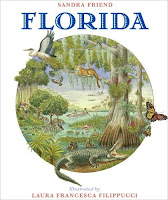 Florida by Sandra Friend.  It breaks Florida up by areas, which is cool, because in our travels, we've been to so many of the places mentioned.  Like, we were recently in the Everglades, and saw alligators in the wild there!


We also read Good Night Florida, and Count to Sleep Florida, Now You See Them Now You Don't, and Babar and Paradise Island.

1. Wild Kratts Crocagator Contest (S3E11)- (Wild Kratts is a PBS show, and Amazon Prime is the sole streaming device for PBS shows now.  So if you have it, you're good to go.  If not here it is on Youtube.) This is a great episode for learning the differences between alligators and crocodiles.  It takes place down in the Everglades, the only place their natural habitats meet.  There's also a cool scene between a crocodile and a shark (see pool time).  (There's also Mom Of A Croc)

2. Octonauts and the Baby Gator (S4E11) - Although Netflix has the first three seasons of the Octonauts, it doesn't yet have season 4, which is a bummer.  I'm hoping they do soon, but until then, you can watch this here.

So there it is, Week 1!
Tell me what you think?  What did you love?  Do you have any other ideas?  What helps you stay sane as a mama?
SaveSave
Posted by Serendipitous at 1:39 PM