Our sweet boy is in love with sharks!  He loves to read about them, watch them, visit them... on one occasion we were taking a boat out into the bay, and he was yelling at the top of his lungs, "Sharks!!! We're coming!!!"  So clearly, we had to have our very own Shark Week. 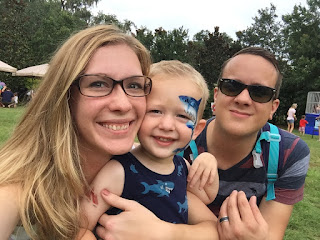 1. Shark Day at the Jacksonville Zoo 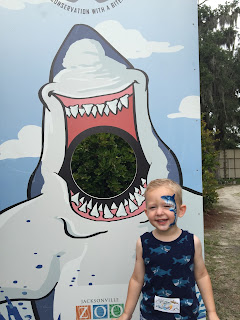 This was actually two weeks ago, but well-worth the share.  Our zoo had a Shark Expo, which naturally we attended.  There were educational booths set up, one of which was Sharks 4 Kids, a group that will actually do a Skype chat with your child/class to teach them about sharks!! They also had a book called Norman the Nurse Shark, which my dear sweet husband bought without my even asking!  To top it all, they had face painting, which Aidan somehow (mostly) sat through! 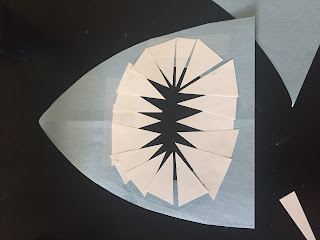 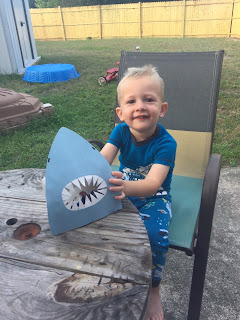 I took the top off a wipe box, and cut out the rubber from the top.  After that I cut a shark head shape out of the blue paper, then an oval for the mouth.  I then cut triangles out of the white paper, and 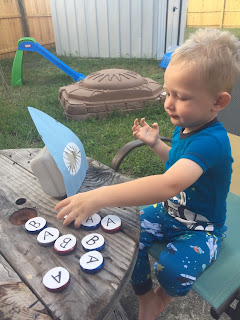 glued and taped (for good measure) the teeth around the inside.  I drew black eyes on the side of its head.  I hot glued the face to the box.  I wrote A-s and B-s on white circles, hot glued those to some Snapple bottle caps, and voila!  I told him sharks love letters, and then I told him to feed the shark all the B-s, or A-s, and he did!  So much fun! 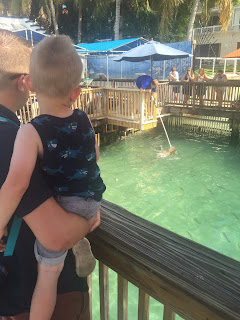 This was a few weeks ago too, but it was too fun, and perfect not to share.  When we had a service in Key West, we visited the aquarium, where they had a nurse shark feeding!  Aidan loved it, and we had a great time!  The nurse shark tank is actually IN the gulf, which I found to be very cool. 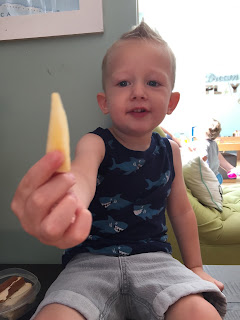 I'm almost embarrassed to post this, because it's so simple, but that's the beauty of it!  I cut up an apple into triangles, and called them shark teeth.  It's super easy to pack, so it came with us  to our beloved indoor play space, Bay N Bee. 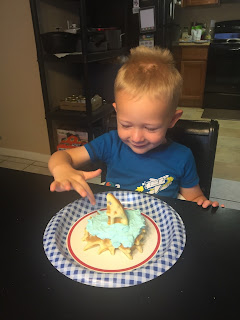 I found this idea on Pinterest, and didn't really get a very good picture of it, but our little boy loved the whipped cream.  I made whipped cream, added blue food coloring, made some waffles cut one piece to look like a shark fin, and it's shark week breakfast! 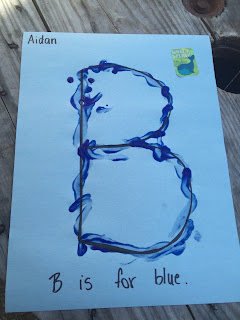 I realize that blue starts with a blend, but it went with our theme, and it's the same blend that's at the beginning of Aidan's last name, so I figured it would be okay.  ;)
So, I wrote out the letter B, and let Aidan trace it with blue finger paint.  It's messy, not pretty (which took everything in this mommy to leave be), but it's all his! 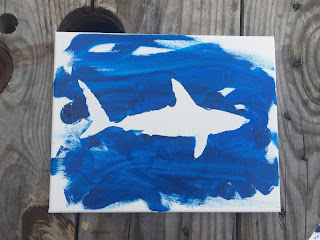 I printed out shark silhouette, cut it out, glued it onto a canvas, and let Aidan paint all over it.  :) 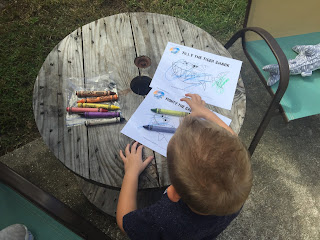 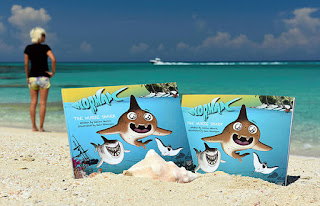 1. Norman The Nurse Shark by Jillian Morris is a very sweet tale about a nurse shark who gets lost, makes some friends and meets a boy who feeds him in the "shark sanctuary" in Bahamas. 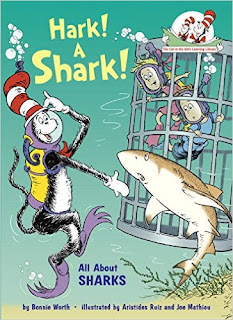 2. Hark! A Shark! by Bonnie Worth is a very informative and yet fun book all about sharks!  It has some of our favorites - whale sharks, hammerhead sharks, dwarf lantern sharks, etc.  I do have to admit, I majorly talked up the library, only to get there and find it closed.  So, Aidan had a melt-down, so I said, "that's okay, let's go to the Target library"!  So, this is one of the new books we now own.  from the Target library. 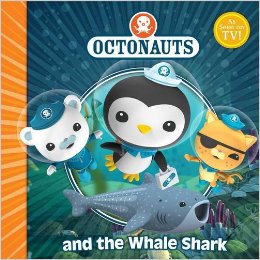 3. The Octonauts and the Whale Shark is a book version of the episode of the same name.  Aidan loves this book, and it's fun to watch him get excited about the whale shark! 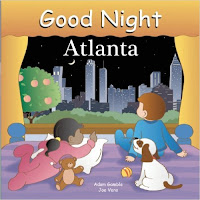 4. Good Night Atlanta by Adam Gamble.  We picked this book up when we went to the Georgia Aquarium.  It also has a whale shark, so you can imagine how excited we ALL get! :)

1. Finding Dory - we finally went to see it in the movie theatre, and Aidan really liked it!  It had me in tears a couple times, so you know it was good!

2. Octonauts Season 1 Episode 21 - The Dwarf Lantern Shark - this episode is on Netflix (but there it's episode 25), or you can probably find it on youtube.  This episode is great because it features both a whale shark (the largest shark), and the dwarf lantern shark (the smallest).

3. Octonauts Season 1 Episode 31 - The Cookie Cutter Shark - also on Netflix.  This type of shark is also featured in the Hark! A Shark! book, which is pretty cool!

I'm sure you've noticed - Aidan wears his shark shirt A LOT.  It's his favorite, and really, who am I to stand between a boy and a shirt.
Posted by Serendipitous at 11:55 AM