This week we lost a day, because I wasn't feeling well, and we had to find indoor things to do, because of Tropical Storm Hermine.  So, the pictures aren't great, but we had fun, and that's all that matters! 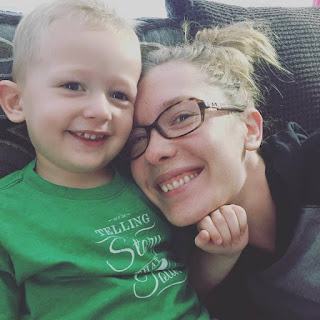 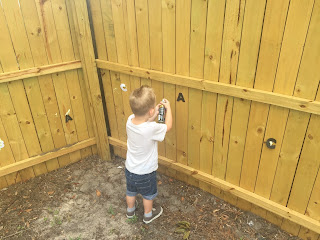 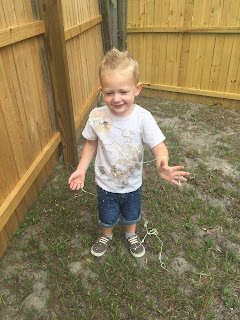 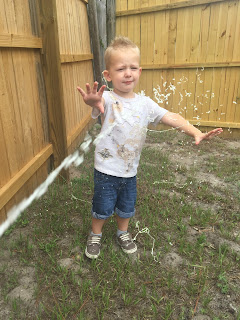 I taped A-s, B-s and C-s onto our new fence (thanks, babe!) and gave Aidan some yellow silly string.  I would tell him to find a "C", or "B", or "A", and then he'd have to spray it.  In theory.  He did really well identifying the letters, but needed help with the spraying part.  Then I chased him and sprayed him with the silly string.  Because that's the real reason I bought it in the first place.

2. Color sorting, and counting to 3 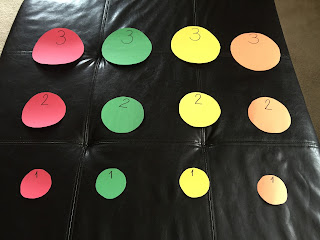 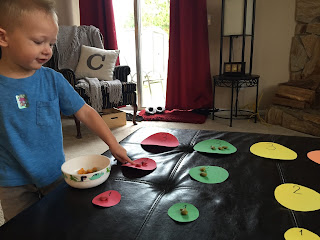 Next, I gave Aidan the gold fish, and helped him count out the number on the circle.  He matched the colors no problem, but the counting them out stretched him a little more than I think he wanted, so it took some gentle nudging.  In the end, he enjoyed it though! 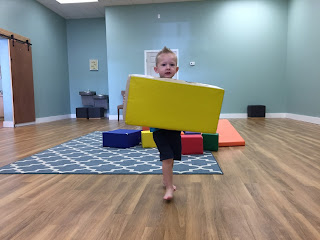 When we became "stay-at-home"-ers, I realized that both Aidan and I missed human interaction, so we started going to an indoor play space.  We pay a monthly fee, but we're there 2-3 times a week, so it is really worth it.  When we were in Miami, we went to a similar place that had a drop-in fee. 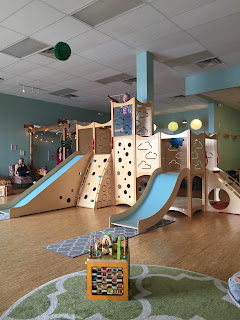 Bay n Bee is an amazing place!  Seriously, the moms are all friendly, the classes (which are part of the fee) are great, Aidan LOVES it, he gets to play with kids, practice his social skills ("sharing is hard, mommy!"), and I get to speak to other adults.  It's worth looking around where you live, to see if you can find something similar. 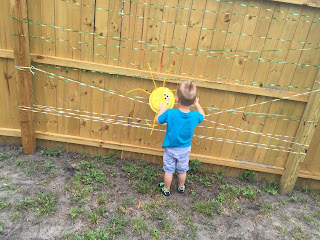 We made this (adorable) spider, and obviously he needed some space to play.  So, I used old Christmas ribbon, and made a GIANT spider web!  It didn't hold his attention half as long as it took to make, but here it is. :D

1. Spiders in a Blanket 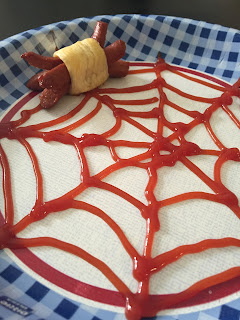 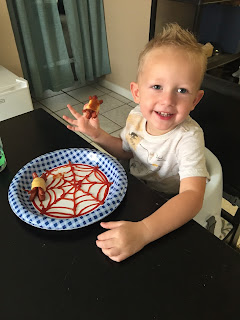 For this snack, I bought Hebrew National hot dogs, and a roll of Pillsbury crescent.  I cut the hot dogs in half, then cut the ends to make 4 "legs" on each end.  Then I wrapped them in the crescent rolls and baked them for the time on the package.  For the spider web, I squeezed ketchup into a ziplock, cut the tip off, and made the web like you would put icing on a cake.  Aidan totally loved the hot dog, but wasn't a fan of the crescent. 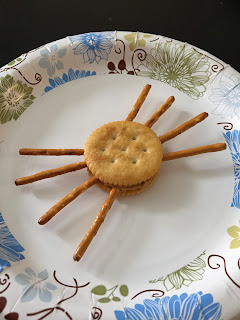 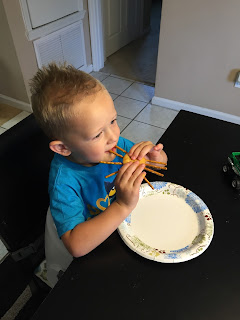 This one was cute!  I just put some peanut butter on the Ritz crackers, stuck 8 pretzel sticks in it, and voila! Spider!

1. C is for Caterpillar 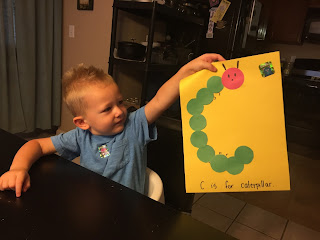 We are adding a letter to our alphabet book every week, so this week we did C is for Caterpillar.  I wrote out a giant C, cut out green circles and a red one, and then had Aidan glue them on.  He did a really great job! 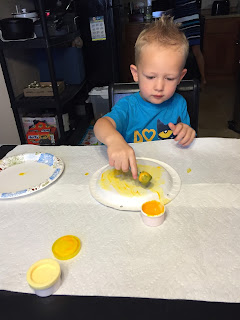 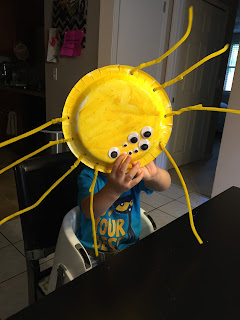 There is this really cool spider we read about in Now You See Me, Now You Don't (link later), called a crab spider.  It changes colors from white to yellow, depending on what color the flower is that it is hiding in.  So, we went with yellow.  Aidan painted a paper plate yellow, I punched 8 holes in it, he stuck the pipe cleaners in the holes, I twisted them into shape, and then he glued 8 eyes on. (Did you know spiders have 8 eyes??  Like they need a reason to be creepier!?)

1. Web Weavers and Other Spiders by Bobbie Kalman 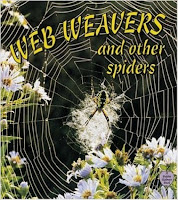 One of our local libraries had a yearly book sale, where for $15 I could fill up a paper grocery bag with books.  It was amazing!  I got 25 books, and since I knew ahead of time what animals we would be learning about, I was able to get a bunch of books for "Toddler School".  This one was great for pictures and info!

2. The Orb Weaver by Alice B. McGinty 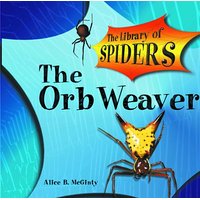 This is another library sale snag!  Spiders are a lot cooler than I realized!

3. Now You See Them Now You Don't by David Harrison 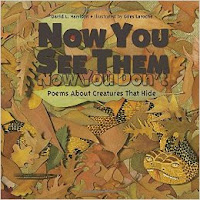 This is one of my favorites right now!  Whenever we visit somewhere, we pick up a book for Aidan either about the place, or by a local author.  We found this gem in Springfield, MO.  The author lives there, and is the poet laureate of Drury University.  The poems aren't "kiddy", which I like, the illustrations draw you in, and it has a great one about the color-changing crab spider.  Trust me, you'll really like this one!

1. Charlotte's Web, the 2006 version is on Netflix.  Of course, it does't have the same nostalgic feel as the 1973 animated movie, but it held Aidan's attention better than I thought a live-action movie would.

2. Annie, Get Your Microphone Little Einstein episode has (what looks like) a yellow crab spider in it!  It's episode 50, and on Netflix too.
SaveSave
Posted by Serendipitous at 2:05 PM