When we visited Key West for a service a few weeks ago, I learned that all wild life in Key West is protected.  Some years back some chickens and roosters got loose, and now their descendants are roaming the streets free as a bird (get it?).  Honestly, it was my favorite part about Key West, so I knew I wanted to "R is for Rooster" when the time came.  So, this week, it's all about red roosters and chickens! 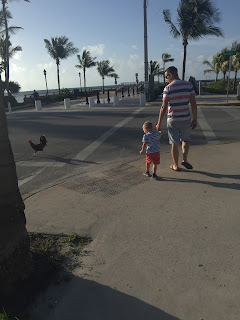 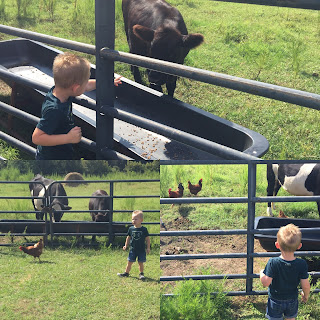 We had some friends from our old church, who have a farm.  I called them up and asked if we could swing by to see the chickens and rooster.  She said we could, and we had a WONDERFUL time!  Many small gardens and farms have times you can visit, tours they do, and even classes for kids on healthy eating, animals and what-not.  It's worth looking to see if there is one near you! 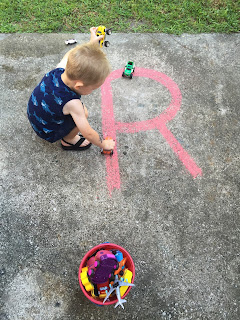 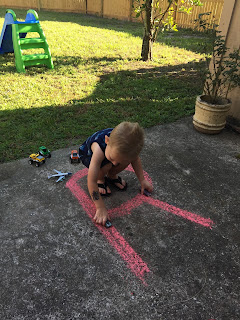 I used rrrred chalk to write the letter "R", and then bought out his bucket of cars, and had him race them up and down the letter.  He really enjoyed this one, and I think it helped him remember the letter "R".  (Tip: don't forget to wipe off the cars' wheels before you bring them back in.  You don't want to get chalk on your carpet.:))

3. Running around the back yard, crowing at the top of our lungs.  That's right!! 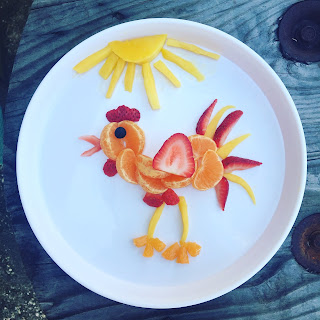 So, I found this idea on Pinterest, and made it my own.  I used one mandarin orange, two strawberries, one blueberry and about 2 spears of mango.  First I arranged the mandarin orange segments into the body.  Then I placed the wing and other strawberry pieces.  Then the blueberry eye, and the mangoes. Aidan was a really big fan, and I loved how it turned out! 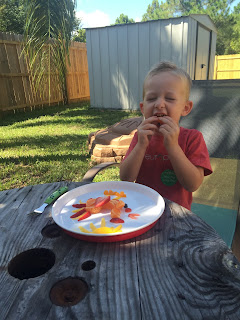 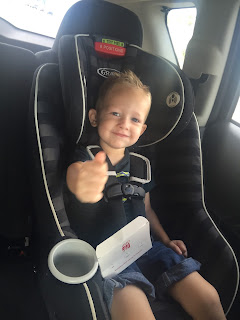 Okay, so this may be a little morbid, since we're talking about roosters and chickens, and then eating them, but I guess that's what you get when you're an omnivore.  So, on our way out to the farm, we got some Chick-Fil-A (or Chick-olay, as Aidan says), and we had a very happy boy in the back seat! 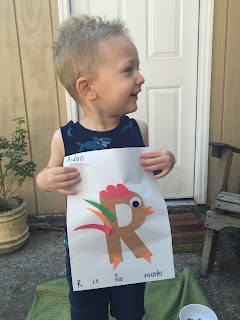 For this addition to our letter book, I cut out all the shapes and then helped him glue the pieces on.  He liked the triangles, and called them teeth, because during our A is for Alligator week, the triangles were teeth (which I was kind of impressed with, that he remembered).  He loved the googley eye too.  I tried to steer him towards a smaller one, but he wanted the "biggest one", and I agree.  It's perfect! 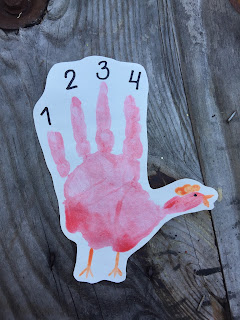 I love classic handprint art for kids.  So we made a Little Red Hen, and I wrote the numbers 1-4 on the tail feathers for practicing our numbers.  His hand already looks so big...sigh.

1. The Rooster Who Loved the Violin by Ben Harrison

When we visit somewhere, I try to get Aidan a book by either a local author, or about the place we visit.  When we were in Key West, I found this gem, and thought I'd share it with you.  This is a great book by a local author about a rooster who loves the violin, and tries to crow along with it - much to the violinist's annoyance.  The second half of the book has photographs and talks about the real rooster(s) that inspired the story. 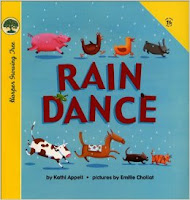 This is a fun counting book about farm animals.  It's not earth-shattering, but it's perfect for what we're doing (and has chickens)!

This was a book I had as a kid, and I love it!  It's about a dog who wakes up, thinks it's morning, but the sun has forgotten to wake up - a task which he and the other farm animals take upon themselves.

4. The King's Chorus by Linda Hayward 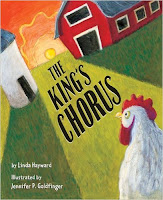 This is a cute book I picked up at last week's library sale.  It's about a rooster who thinks he's all that and a bag of chips, and keeps everyone up all night with his cock-a-doodle-doo-ing, until a goose tells him that the sun is actually the eye of a giant rooster in the sky, and that as he rises, every rooster in the world has its' part in his choir.

1. Chicken Run - it's on Netflix, so if you have an account, you can watch it for free, yay!  It's a childhood favorite of mine - plus Mel Gibson as a rooster is just took great to pass up.

2. Chicken Little - (also on Netflix) it's not my favorite, but Aidan really likes it, and if it gives me time to do laundry, put on clothes and do my hair, I'm not totally against it. :)

3. Paw Patrol - like we need a reason to watch Paw Patrol!!!  But, the mayor has a pet purse chicken named Chickaletta, so I guess it fits our theme - sigh...

4. Ask The StoryBots, Episode 1 "How Does Night Happen?" - We are new fans of the Storybots! Apparently the app has been around for a while, and already has a big following, so we're late to the party, but nonetheless enthusiastic!  They're little robots who live in computer parts, and answer questions for kids.  This episode is perfect for this week, because it has a song about the color red, as well as one called "Chicken Bop", which Aidan loves to dance along to!
Posted by Serendipitous at 8:35 AM